After being dark since Eureka! shuttered in 2020 because of COVID, the corner of McKinney Avenue and Blackburn Street is officially alive and well again.

We checked it out on a recent Tuesday evening and by the looks of it, the secret is out. We arrived for an early dinner around 6 p.m., and there were only a few tables left. We sat at the bar and were immediately greeted by the bartenders who were whipping up a variety of unique cocktails. The décor has a coastal vibe with bright pops of color, natural wood and a flood of natural light with floor-to-ceiling windows. Fiatto’s signature cocktail is the Queen Bee ($12), a refreshing gin-based cocktail with herbal tea, honey and lemon served in a bee-shaped glass with a spray of tiny white flowers for garnish. The Cosmo Royale ($12) is served with Citron vodka, cranberry, orange and Italicus liqueur, the latter of which adds an aromatic flavor to balance the fruit. For starters, we had the caprese ($15) and focaccia. The caprese has small, colorful sliced tomatoes, burrata imported from Italy, fresh basil and aged balsamic. The burrata is creamy on the inside with a firm texture on the outside that spreads beautifully on a piece of their house-made focaccia. The focaccia is about 6 inches in diameter, large enough to share between two people without ruining your appetite. It can be ordered with a side of pepperoni sauce, fontina fondue or both. We opted for the bread without any sauce and instead dipped it in the aged balsamic from our caprese. 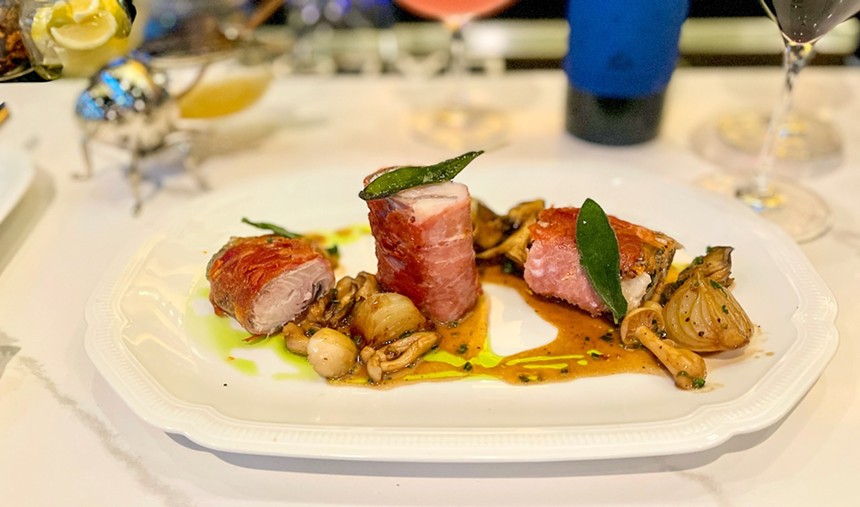 We also tried the pappardelle topped with a hearty short-rib ragu and whipped ricotta, garnished with crispy rosemary ($26). A bit of the short rib, with a small heap of ricotta swaddled in a pappardelle, was the best bite of the night.

For dessert, we opted for cannoli. The cream filling was light and not too sweet and had a nice crunch from the chocolate chip morsels on each end and the golden crisp cannoli shell. We don’t typically order dessert at restaurants because we’re often too full, but their cannoli is worth saving some room for.

A few other dishes we saw at other tables ensured we be back, like the Caesar salad, calamari and the tuna tartare. The Caesar ($13) was large enough to be a meal and is served with Little Gems lettuce, Parmesan, croutons and a white anchovy dressing. The calamari fritti ($15) appeared to be perfectly battered and served with crispy lemon and a cherry pepper aioli. This appetizer was large enough to share between two people. And the tuna tartare ($19) delivered a beautiful presentation with chunks of fresh ahi tuna, orange, Castelvetrano olives, Calabrian chilies and saffron aioli. Like we said, we’ll be back for more.

Marc Forgione’s One Fifth Is a Family-Style Italian...

Fiorella Italian Bistro Is a Creative Addition to...

Why Domino’s Failed in Italy

Domino’s retreats from Italy having failed to conquer...