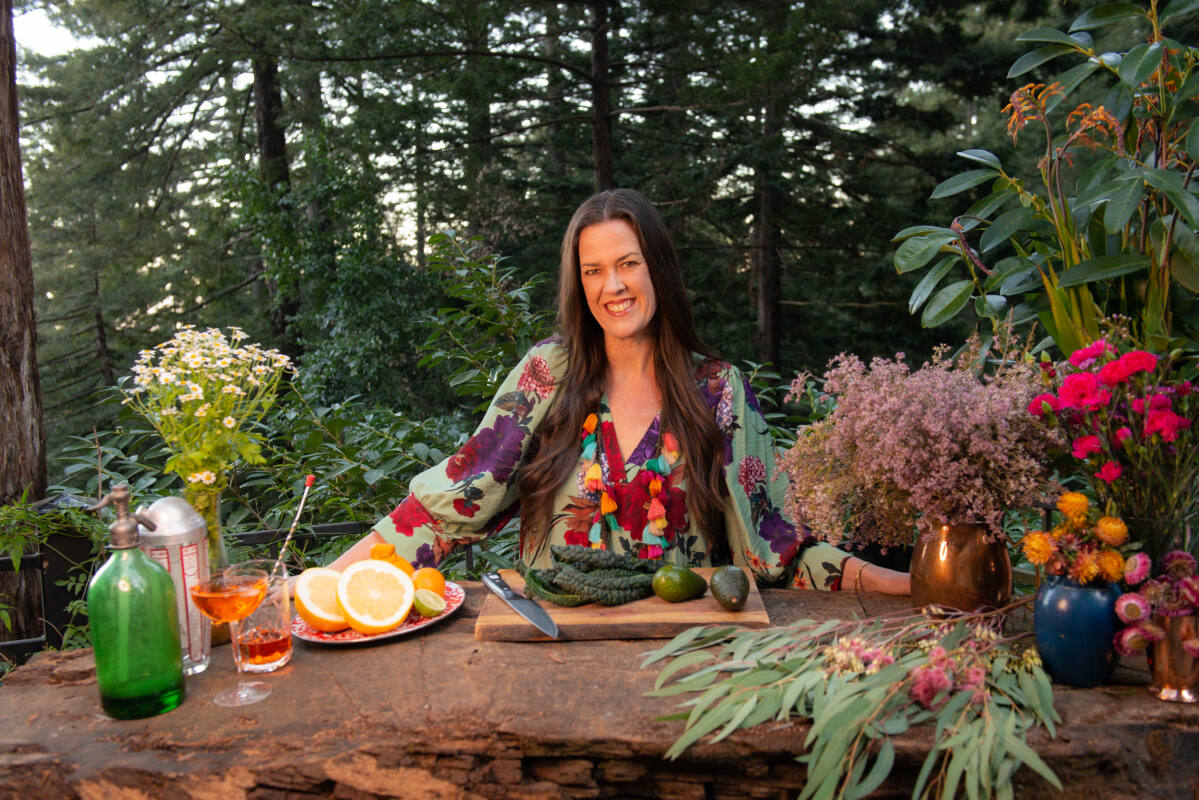 “The focaccia trend during the pandemic was crazy, but I was never going to make the focaccia dough,” she said. “I’ve been wanting to have a Floral Flatbread cocktail hour with girlfriends. You can all have your own station and chat while you make them.”

In the same vein, she calls for ready-made dough for a Calzone Bar, perfect for a weeknight. She lets the kids choose their fillings and fill the dough, then top their calzone with grated cheese in the shape of their initials.

There are also hearty vegetarian entrees ideal for weekend entertaining and dinner parties, including Walnut Enchiladas and Polenta Lasagna, which can be made ahead of time.

On the road, Gleeson said, she often found herself cooking breakfast for the clan, so she packed a lot of just-add-water oatmeal and pancake mix that she would jazz up with veggies like beets.

“We made the Veggie Spaghetti a lot,” she said. “I did a whole wheat spaghetti, then picked up zoodles and did a little toppings bar with Parmesan and veggie meatballs and basil pesto. That was an easy one to make in a kitchen you don’t know.”

The cookbook also includes some very helpful road-trip tips, from what to pack for the car to how to keep kids occupied during long drives.

“Our first trip was about 2,500 miles, from our home in Santa Cruz south to L.A., over to the Eastern Sierra, up to Lassen and Humboldt and down the coast,” she said. “Then we did maybe five or six shorter trips over the next year.”

Recipes that grew out of California’s family farms include Date Shakes, inspired by the Flying Disc Ranch in Thermal; the Gold Miner cocktail (Bourbon, orange and Meyer lemon), inspired by the preserved gold mining town of Bodie; and Lavender Shortbread, inspired by De La Cour Ranch, a lavender farm in Lone Pine they stumbled on out of desperation and ended up staying at for the night.

“I did not expect to love the desert so much,” she said. “We picked lavender there and brought lavender home.”

It all started in Sonoma County

Growing up, Gleeson lived in the west county, off Occidental Road, where her parents planted a big garden and cared for an apple orchard. In the 1980s, her mother took classes from John McDougall of Santa Rosa, who teaches about the benefits of a whole-food, starch-based diet, and she transitioned the family to eating vegetarian.

“I was about 7 or 8 at the time, and I was very interested in it,” Gleeson said. “It was formative for me to see her make a food revolution for our family.”

As a child, Gleeson was encouraged to draw, and she took watercolor painting classes in a studio for kids in Sebastopol. Her uncle was a professional painter, and her mother and grandmother loved to paint.

“It was a career that was regarded as viable in my family,” she said. “And we talked about how teaching could be part of it.”

While studying fine art at UC Santa Barbara, she went abroad for a year to the culinary capital of Italy — Bologna — where she explored photography and became more deeply involved in food.

After college, she moved to New York and worked with magazines and studios, then got an fine arts degree in photography and started teaching at a local college.

While on her road trip for the book, Gleeson met up with her parents and other family members at Sea Ranch. Other familiar destinations that appear in the book include a vineyard near Campovida in Hopland, the Russian River and her brother’s property in the hills near Calistoga. His cabin burned in the Glass fire in 2020, but her parents’ home in the same area vicinity was miraculously spared.

Among other farms that inspired recipes in the book is Flygirl Farm in Pescadero on Highway 1, where the farmers grow flowers and dry farm near the beach.

“We picked strawberries with them one day, and that inspired the Strawberry Caprese,” she said. “I’m always trying to create very simple recipes that focus on the produce and are simple enough that people will actually make them.”

The following recipes are from Erin Gleeson’s “The Forest Feast Road Trip: Simple Vegetarian Recipes Inspired by My Travels through California” (2022, Abrams, $40).

“Our friend Debbie runs a farm in Los Altos Hills, and we stopped by in the spring to pick snap peas and oranges,” Gleeson said. “I came home and made this snacking platter, which works well as an appetizer or alongside soup for lunch.”

The Turkish cafe which serves the most beautiful brunches in Cardiff

“Evidence is overwhelming we’re heading towards a long-term...

5 places to get a black bean burger...

Shopping, recipe tips to save you big