How I Make Delicious Chicken With 3 Ingredients + Recipe Suggestions 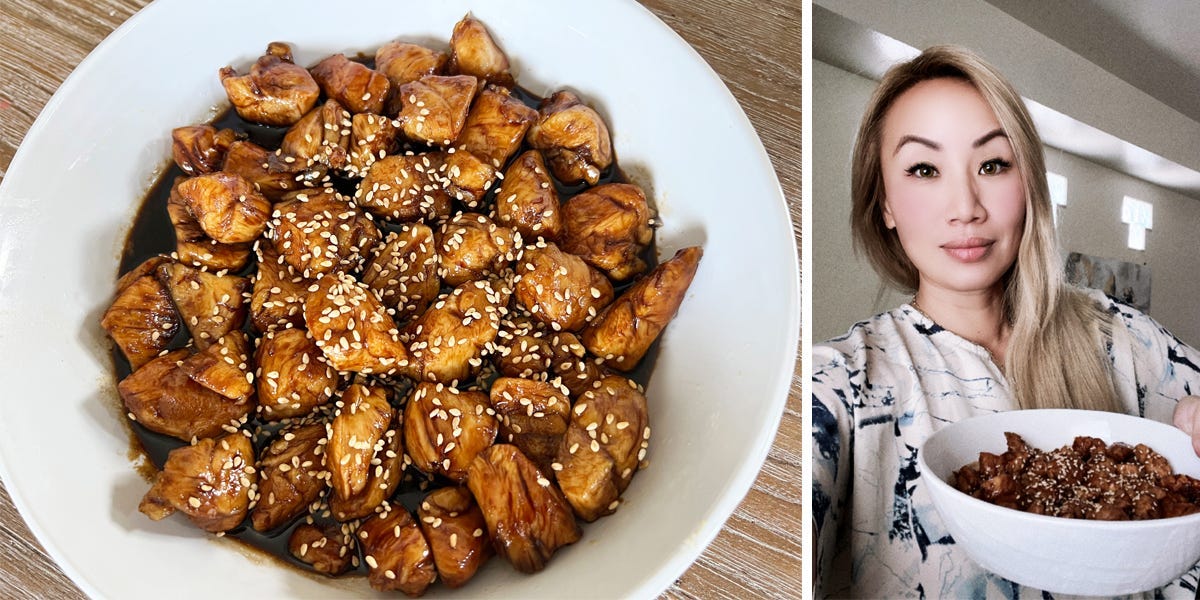 I love an excellent plate of teriyaki chicken and was excited to find an easy recipe that only calls for three main ingredients.

It mostly includes pantry staples and omits some typical additions, like sake.

So I tested the recipe out for myself.

I started by drying the chicken

It’s important to dry your chicken before cooking it in a pan to get a nice sear. Otherwise, it’ll steam.

The recipe recommends trimming off any fat, but I left it on since that’s where a lot of the flavor comes from.

It also doesn’t specify how much salt to use, but I added a generous amount.

Once I chopped the chicken into bite-sized pieces, I turned on the heat

I warmed the pan over medium heat for a minute before adding the vegetable oil. After another minute, I threw in the cubed chicken.

I turned the meat a couple of times until it was nicely browned and cut one of the pieces to make sure it was white inside.

Even though the instructions say to fry the chicken for 12 minutes, I only did so for nine since I didn’t want to overcook it.

I put the meat aside in a bowl, leaving the burner on.

Conveniently, the sauce goes directly into the same pan, which saved me dirty dishes

First, I added the light-brown sugar, then the soy sauce. I continuously stirred the mixture over medium heat until it started to furiously bubble.

Then I kept stirring for about two-and-a-half minutes until the sauce thickened and reduced.

The recipe says to mix for five minutes, but the sauce looked done, and I didn’t want to reduce it too much.

Adding the chicken back into the pan, I stirred it in until it was thoroughly coated. It looked and smelled so delicious that I wanted to eat it right then and there.

I poured the chicken into a bowl, then dressed it with sesame seeds that I happened to have in my pantry. I forgot to buy green onion for garnish, but I didn’t miss it.

I served the final product with rice and steamed veggies.

Even though the sauce was fantastic, the chicken didn’t turn out great

The sauce was savory and delicious. I doused my rice in it and could eat that combo alone as a meal.

Unfortunately, the chicken was super dry and seemed almost inedible, even though I cooked it for less time than instructed.

Teriyaki chicken is a Japanese recipe, but I’d recommend velveting the meat — a quick Chinese technique where you marinate your meat in egg white and cornstarch before cooking it in oil to make it super tender.

I’d also leave the skin on because it’s tastier and helps the meat retain its moisture, and swap chicken breasts — which tend to be dryer — for thighs.

Overall, I’d totally make this sauce again, but I’ll try a different strategy for the chicken.

Switching out salt for another seasoning could add...

‘Karen’ Tries To Get Worker Fired From His...

What is an alcohol-free bar that serves only...

Why Did This INCREDIBLY FANCY Menu Make HISTORY??...

How a Master Chef Built a Two-Michelin-Starred Restaurant...

Domino’s tried to sell pizza to Italians. It...

I miss the simple things – having a...

The Economic Principle That Helps Me Order at...