You haven’t experienced flaky pastry until you’ve tried Maaji’s Street Kitchen’s (3324 North Lindbergh Boulevard, St. Ann; 314-395-7173) paratha. Tear into a piece and micro-wafers of the Indian flatbread shower off onto the table, into the assorted curries waiting to be sampled and onto your lap. You’ll know the mess is more than worth it, though, the minute you sample a bite that turns from crisp to tender in your mouth. Here is a bread to rival any French croissant or phyllo-encased spanakopita.

One thing you’d never know from taste alone: The paratha is reasonably healthy.

Unlike many deep-fried restaurant renditions, chef-owner Heena Chopra’s paratha is air fried and contains olive oil rather than butter or ghee, the clarified butter often used in Indian fare. That baking method gives the breads their lighter-than-air texture and a dry, rather than oily, exterior.

It’s fitting that Chopra has turned something seemingly so decadent into something wholesome without sacrificing taste, perhaps even improving upon the original in the process. Her restaurant, which opened in St. Ann late last year, serves healthful dishes comprised of almost all organic ingredients, with minimal added fat or sugar and no cream or thickening agents — not that any diner would be able to tell. 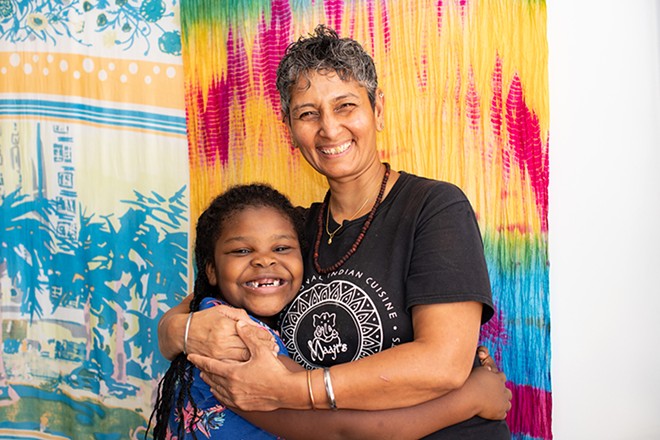 It’s the fare that Chopra serves her family, and it has roots in the food stories of her youth.

Chopra grew up in Delhi, the bustling Indian capital, which she describes as a New York City-style melting pot. Her mother, Jaskiran Chopra, worked in telecommunications at a time when many women were homemakers. However, her career never got in the way of feeding her family. Chopra recalls how her mom was the first one up in the morning and had a fresh breakfast and lunch ready to go. She’d also make dinner, staying up later than anyone else, impressing upon her daughter how much you can accomplish “if you keep going.”

At her mom’s side, Chopra learned kitchen skills by serving as an assistant, kneading dough, shelling peas and destemming cilantro leaves. Meanwhile, she picked up knowledge about spices and tempering, a technique where spices are toasted in oil and added to a dish as a finishing touch to deepen flavor.

For Chopra’s 15th birthday, her mother planned a big celebration and made all the food herself. It’s a fond memory — one that highlights a love for cooking, entertaining and caring for others, as well as the deep regard Chopra holds for her mother’s devotion.

That respect flavors Maaji’s Street Kitchen, which is evident in the restaurant’s name. “Ma” is Hindi for mother, “ji” is an honorific, and together they’re what Chopra calls her mother.

Though the restaurant opened last year, Chopra first dreamed of it in 2016. After immigrating to the U.S. with family 19 years ago, Chopra began working in the restaurant industry. She spent 10 years at Denny’s on Dorsett Road in Maryland Heights — which she calls an education in ranch dressing as well as how to handle 13 table stations “without freaking out” — then moved to First Watch and Red Lobster. 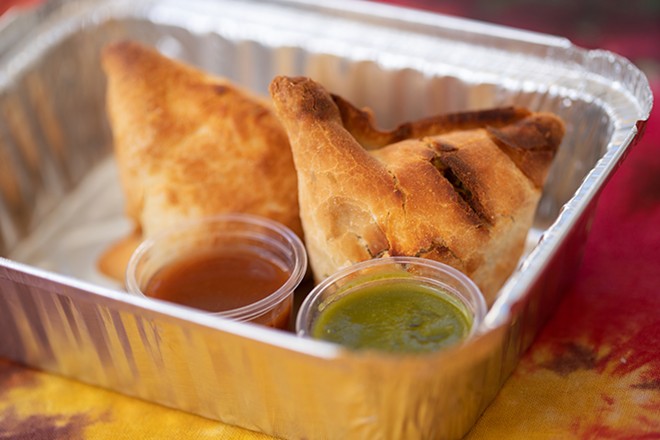 Maaji’s Street Kitchen’s samosa is cooked in the air fryer, as is the paratha.

Chopra might have continued on that path but for a visit to India, where her mother took her to a restaurant franchise opened by a former potato-patty seller. Chopra was amazed, and back in St. Louis, she began scheming, saving money for what she imagined would be a food truck. Due to logistical roadblocks, that didn’t happen. Instead, she found a small spot in a strip mall in St. Ann, convinced the owner the space would suit a restaurant just fine and got cooking. Most of the business is takeout, and Chopra hopes to launch a food truck in the near future.

Despite its small size, Maaji’s delivers outstanding depth of flavor. Many of the dishes are vegan or gluten free, but there’s at least one option for most dietary preferences.

No diner should skip the samosa. Chopra differentiates her version by cooking it in the air fryer instead of the deep fryer. The exterior delivers a deep crunch without an oily finish. Tear into one, and you’ll find an interior positively stuffed with filling, which sings with a well-spiced combination of potatoes, vegetables and onions that balances heat with starchy goodness.

Chopra serves it with two chutneys, a traditional sweet-sour tamarind and her own special recipe, a blend of fresh cilantro, tomato, ginger, garlic, chiles and lemon juice. It delivers a kick of spice and a jolt of welcome acidity that handily brightens up the heaviness of the samosa. Chopra also offers the appetizer as samosa chaat — a broken samosa served over chickpeas with onion, tomato, chickpea and yogurt that’s a popular street food in India. Both preparations evoke a primal appreciation for carbs wrapped in more carbs.

For her mains, Chopra dips into her proprietary masala (turmeric, chili powder, Kashmiri chile, black pepper, salt, cumin and coriander) and garam masala (bay leaf, cinnamon, cloves, black cardamom, green cardamom and peppercorns) that she blends and roasts. It gives a bespoke spin to dishes that can be found on many menus across town. Perhaps the most unique is the curry chicken, the sole meat entry on an otherwise vegetarian menu. Here the chicken is shredded and presented in a fiery gravy; the protein is tender and melts in the mouth while its accompanying sauce lingers as a warm reminder. 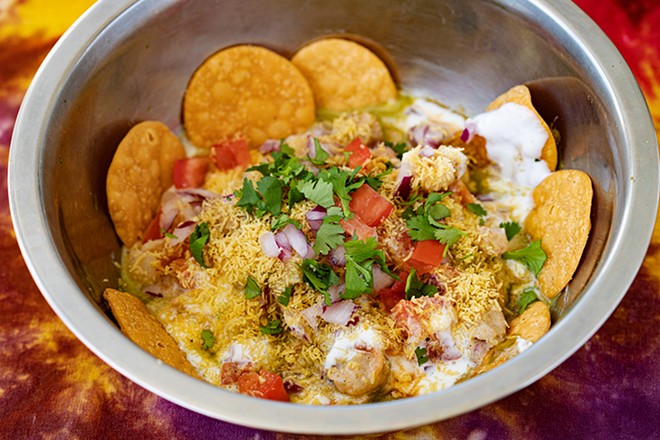 The matar paneer is a combination of cubes of fresh, mild cheese akin to tofu broken up by sweet, tender peas. The relatively dry preparation is characterized by an astonishing amount of that paneer, which squeaks satisfyingly in the mouth; it’s a crowd pleaser. A favorite of Maaji’s mains is her dal masala, a curry that combines two varieties of lentils for textural delight along with tomatoes, ginger, garlic, green chile turmeric and lemon juice. The last ingredient shines in the dish — one of the hottest options on her menu, but so perfectly balanced that even the spice averse will simply reach for a glass of water with no histrionics.

All of Maaji’s mains can be served as a roll-up or a bowl. For the former, Chopra tops a paratha with basmati rice, tomatoes, cucumber, onion and her fresh chutney, adding a lemon wedge so diners can customize the flavor. (A bowl is the same without the paratha.) Though it sounds heavy, the brightness of the chutney and the fresh, cool crunch of the salad shines, making these far more than the sum of their components. Especially notable as a filler is the gobhi masala; here the expertly flavored cauliflower provides a slight resistance in the mouth that quickly gives way to a creamy vegetable that seems created just for this preparation.

Those who sweat just thinking of spice should reach for Maaji’s mango lassi. The cool drink combines only three ingredients: Greek yogurt, mango chunks and some cane sugar — no cardamom. Its cool, yogurt-forward taste serves as a welcome contrast to the curries and is a delicious, refreshing beverage on its own merit.

Since no meal would be complete without something sweet, Maaji’s offers a selection of dessert favorites such as the gulab jamon, a warm, doughnut-hole-like pastry soaked in rosewater syrup, and rasgulla, a cool and an astonishingly sweet (in a good way) cheese dumpling.

A more surprising option is Maaji’s Sweet Rolls; Chopra takes those great parathas, spreads them with Nutella, rolls them and dusts powdered sugar on top. Biting into the shattering pastry to find the soft and satisfyingly sticky chocolate-hazelnut spread is a wholly unexpected experience. Like much of what Chopra does, it’s unconventional — and so much the better for it.

Why You Should Store Cookies With a Slice of Bread

How to make kheema, the versatile Indian ground...