When Jamie and Steve Komorek opened Trattoria Marcella (3600 Watson Road, 314-352-7706) in 1995, they were insistent on being a different kind of Italian restaurant — a more traditional eatery as opposed to the St. Louis-style Italian spots on the Hill that the city’s diners had come to associate with the cuisine. To signal that intent, they left a certain dish off the menu that showed just how serious they were about standing apart from the crowd.

“We didn’t do toasted ravioli,” Jamie says. “We wanted to do more traditional Italian, and toasted ravioli seemed like it was St. Louis invented. It wasn’t until my brother went to Italy to train under the Slow Food program that he learned how truly local everything is in Italy — not just city to city but house to house. Everybody may make a certain dish, but everybody’s grandmother makes it in a different way. When he realized that and came back, he felt comfortable that we could make toasted ravioli by hand in our own way.”

Jamie and Steve, together with their sister, Christine, who joined the restaurant a few years after it opened, have been doing Italian food their own way since 1995. Back then — in an era when diners were much more set in their ways — they were taking a risk when they opened Trattoria Marcella as a different kind of Italian restaurant, even if they didn’t see it that way. For them, the industry was so deep in their bones that they were confident they had the know-how to make it happen. They had the family history to back them up; their mother, Marcella Slay Komorek, was their link to one of the city’s most iconic restaurant families, with ties to the business stretching all the way back to when her parents opened their first restaurant in 1911. The family’s name had become synonymous with the business, so it was natural that it would be a part of the Komorek siblings.

Caramelized cauliflower is one of the restaurant’s popular small plates.

However, it wasn’t that family history that gave them the knowledge and experience needed to open a successful restaurant. As soon as they were old enough, Christine, Jamie and Steve all worked in the restaurant business, sticking with it through high school and college and going on to make their own ways in the business. For Christine, that led to an event-planning job at a club on Hilton Head Island; for Steve, it meant a chef job in Las Vegas, which he left after a couple of years to help his cousin, the acclaimed chef David Slay, open a restaurant in Los Angeles. Steve learned a lot from both places, but after a few years out west, he decided he was ready to come home. Jaime came out to help him drive home, and all of that time in the car got them thinking.

“That’s when we hatched our plan to open a restaurant,” Jamie says. “We took out a notebook and started writing down so many concepts; one would write while the other would drive, and we’d switch off. We drove straight through like that. We had so many concepts in our head — most of them tilted Italian — and we figured that once we found the right space, it would tell us what to do. That was the beginning of our plan.”

The Komorek brothers were sure they’d found the right spot not long after they returned to town. In Clayton’s Demun neighborhood, a neighborhood market was going out of business, and there was chatter about turning it into a restaurant space. The pair fell in love with the building, sketched out plans to turn it into a Mediterranean restaurant, got their liquor license approved by the City of Clayton, and even started investing money into the space. The only problem was that they didn’t have an actual signed lease, but a gentleman’s agreement with the building’s owner; he suffered a stroke before they could put everything on paper, and the entire deal imploded. That space got split up and went on to become Jimmy’s Café on the Park (now Louie) and Sasha’s Wine Bar, while the Komoreks were forced to come up with a Plan B.

Trattoria Marcella’s wine cellar offers one of the city’s most extensive selections.

Initially, Jamie and Steve thought they’d open on the Hill, but when they came across the storefront on Watson Road in the Lindenwood Park neighborhood, they felt it was the right fit. Their suspicions were confirmed when they were a hit right out of the gate.

“People took to it right away,” Jamie says. “It was like hitting a hole in one. On the first night, we did 100 people, and it just took off from there. Then, we got our first review from the Riverfront Times, and it was glowing. We were also Joe Pollack’s last review [in the St. Louis Post-Dispatch], and it was also very good. We got so busy all the time and there was a weeks-long wait to get in. People just loved what we were doing.”

Jamie credits a multitude of factors for igniting the Trattoria Marcella spark in the St. Louis dining consciousness, but one in particular stands out: the lobster risotto. He laughs when he describes the phenomenon, because it wasn’t supposed to even be a regular menu item. Designed as a one-night-only New Year’s Eve special, the dish received such a warm reception that they decided to keep offering it. It’s never been on the formal menu but has lived on as a verbal special and remains the restaurant’s signature offering. 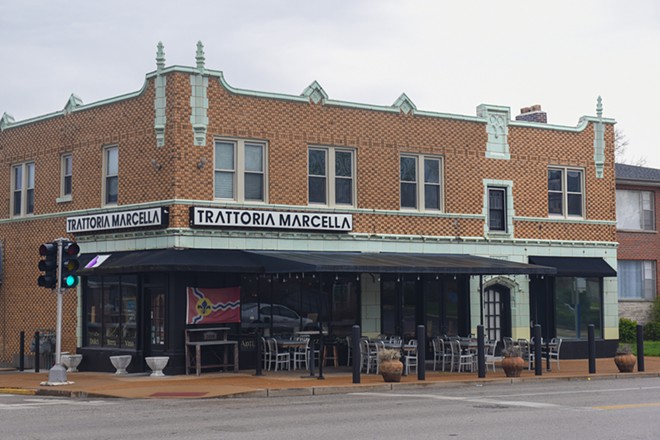 Trattoria Marcella has been an important part of the St. Louis dining community since 1995.

The Komorek family understands that they cannot stop serving the lobster risotto, but they also are mindful of the need to innovate in order to stay relevant. As the city’s restaurant scene has grown and evolved, so, too, has Trattoria Marcella. However, the one thing that never wavers is the team’s commitment to hospitality.

“There is food, there is service, and then there is hospitality,” Jamie says. “We excel at hospitality. The kitchen may have an off night, or the service may not be perfect every night or at every table, but hospitality doesn’t cost us anything to produce. It’s something we can give freely — welcoming you at the door, thanking you for coming in and really meaning it, bending over backwards to make it right when something goes wrong. We make people happy, which is why we have people who’ve come here forever and now their kids come here. They’ve celebrated weddings and rehearsal dinners and anniversaries and birthdays with us. You get to be a part of people’s lives, and those relationships are what matter.”

We are always hungry for tips and feedback. Email the author at [email protected]

The Resolution in the Carbone’s vs. Carbone Legal...

Former Italian Restaurant in Hellertown: What Should Go...