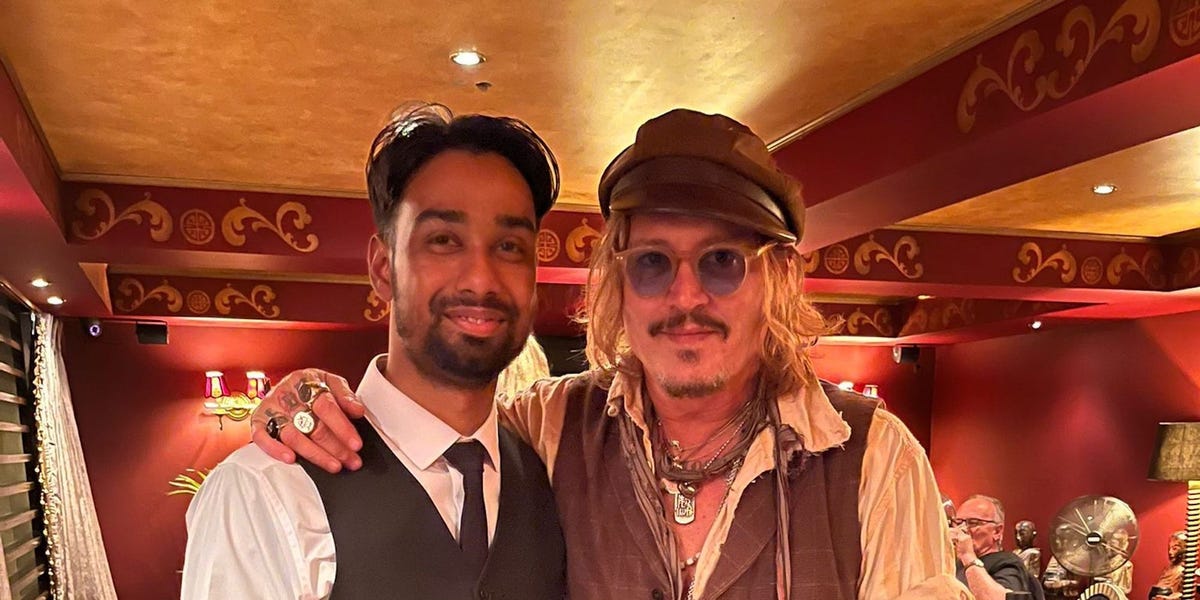 Johnny Depp took over an entire Indian restaurant in the UK as part of his tour with Jeff Beck, ordering champagne and cocktails and tipping generously, staff told Insider.

The actor had recently won his years-long defamation lawsuit, in which a jury determined that his ex-wife Amber Heard defamed him.

The jury in the case, in which bitter accusations of domestic abuse were exchanged, also found that Heard was defamed by Depp’s lawyer. Heard’s lawyer Elaine Bredehoft said she planned to appeal.

As the trial progressed, Depp began to join dates of a European tour with Beck.

On Sunday, he opted to feed Beck’s tour crew at Varanasi, an Indian restaurant in the central English city of Birmingham, according to the restaurant’s operations manager. Depp and Beck were performing in Birmingham the following night.

Mo Hussain told Insider that Depp booked the entire 300-seat venue, inviting about two dozen members of the tour crew to eat there after his security personnel toured the place.

“Obviously, we were starstruck, and we were a bit dumbfounded that they decided to come here,” Hussain said.

The group stayed for about five hours and ordered a set menu of chicken tikka shashlik, vegetable samosas, and a king-prawn starter, he said. Depp, Hussain said, told him it was “the best curry he’d ever had.”

Afterward, “he ordered another lot and then made us put it in a bag and took it back to his hotel room,” Hussain said.

The group had “expensive bottles of wine and some expensive champagne,” as well as cocktails, Hussain said.

While Beck was quiet, chatting mainly with his crew, Depp welcomed the attention from staff, Hussain, and his family and spent 20 minutes hearing about how the restaurant was run in Hussain’s office, he said — including exchanging “banter.”

“He was very gentle,” Hussain said. He called the group “very friendly people.”

“They’re just average people. They know how to talk to you on the same level,” he said. “It’s not like they were, you know, they left us out of any conversation. They kept us involved in everything.”

Hussain said he wasn’t allowed to say how much Depp spent, adding: “There’s a lot of money involved in it that was spent on the night.”

Depp took time to meet all of Hussain’s immediate family and performed a few one-liners for his kids, Hussain said. “He spoke to all of them,” he said. “He sat with them, joked with them. He hugged them and kissed them.

“It was a surreal experience for all of us.”

The tour with Beck is seen by fans as a victory lap for Depp, who experts say is not likely to have his career damaged by the verdict, Insider’s Lauren Frias reported.

But he has made no public comment about the trial beyond an Instagram post immediately afterward in which he thanked the jury and said he felt a burden had been lifted.

At Varanasi, when asked about the trial, “he just smiled the comments off,” Hussain said, adding: “It’s probably a big relief to get something like that off his shoulders.”

During the Beck tour, he played in the northern English city of Gateshead on Thursday. He also played a gig on Wednesday, the day of the verdict, instead of being present in court.

Depp resoundingly lost a similar case in the UK, where the judge determined the accusations against Depp of domestic abuse were true.

A note on the issue: Everyday Indian food...

Kuttanadan in Floral Park and more restaurants to...

What Is Indian Fried Chicken?