Baklava can be traced back to Topkapi Palace in Istanbul, as far back as 3,000 years ago. But I am relishing this delicious treat closer home: at Sweet Smith cafe in Coimbatore. Made from 40 layers of crisp phyllo sheets, filled with pistachios and cashew nuts, with a drizzle of honey on top, the baklava is indulgently sweet, yet light and crunchy.

The Sweet Smith chain was launched in Kochi by two sisters, Sanam Safid and Sonam Safid, both from Elamakkara in Kerala. They specialise in Turkish desserts from the popular baklava and kunafa, as well as the Egyptian umm ali. After catering across Kozhikode, Malappuram and Perinthalmanna in Kerala, they have just launched their first outlet in Coimbatore.

“They largely operated as home bakers from 2017, sourced ingredients like the kunafa dough and phyllo sheets from the UAE and Egypt and sent out the goodies to friends and family,” says Hani Hassan, co-founder, who helped his wife Sanam grow the Sweet Smith chain into a successful business in Kerala.

In Coimbatore, the team has partnered with Reswin Nazeer KR from the Hotel City Tower group. “Coimbatore is opening up to new cuisines and people are trying out new experiences and desserts like any cosmopolitan city. So, we thought, why not?” 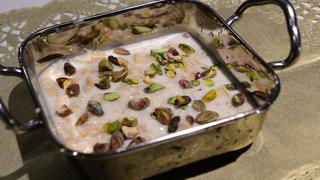 As for Reswin, he was convinced after a spoonful of umm ali. Stating that this was an opportunity to bring his wife’s favourite desserts to Coimbatore, he adds that he was especially charmed by the Egyptian pudding. Named after the wife of the ruler of the Ayyubid dynasty in Egypt, who asked her cooks to come up with the most delicious dessert they could create, umm ali is a blend of cream and nuts.

Hani calls it soul food, like kheer or payasam, and I have to agree. In Sweet Smith’s version, phyllo sheets are baked with cream (made in-house) and milk, then garnished with crushed pistachios. It is crusty, mildly sweet and earthy, and makes me happy instantly. 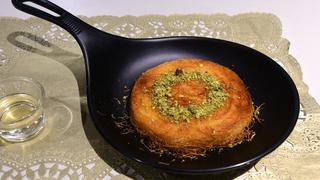 “Though traditionally it is made with croissants and bread, we used phyllo sheets and everyone loved it,” says Hani, adding “These desserts are completely vegetarian. Even eggs are not used. They use butter and dry fruits generously, so we cut down on sugar.”

Sweet Smith also offers over 10 varieties of kunafa from the classics to versions with Ferrero Rocher chocolates and sizzling ice cream. As the central kitchen is in Kozhikode, the team adopts a double baking system so customers in Coimbatore can enjoy desserts straight out of the oven. For example, for kunafa that requires 45 minutes of baking, the first 30 minutes is done at the Calicut central kitchen and the second bake of 15 minutes at the cafe in Coimbatore. Baklava is baked partially and then frozen, as are the phyllo sheets that go into umm ali. 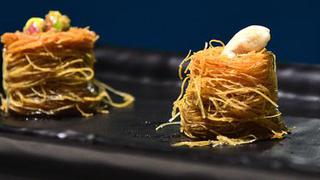 What’s next on the menu? Hassan says they will never run out of variety to experiment with. “Baklava is like our halwa, there are 300 to 400 types,” he says, adding “We finalised eight varieties only after trying out over 40.”

Eat This, Not That mentions Aarzu in Freehold

The young Turk of kitchen- The New Indian...

Hina Khan Left Us Drooling With Her Turkish...

With Shishkebab, Turkish taste back in Columbia County,...

So much more than just Turkish delights from...

Dining Out: Trips to the suburbs yield tasty...