Kenney’s signature style emphasizes the use of whole food, plant-based ingredients, such as seasonal fruits and vegetables, nuts and seeds, and grains to craft high-end dishes. His signature raw vegan lasagna, which features zucchini noodles, heirloom tomatoes, and housemade cashew cheese, is a shining example of this. Other specialties of Kenney restaurants include artisan vegan cheeses and an extensive organic wine list. But Kenney isn’t just about fine-dining and small plates: you can also find classic American fare like burgers and fries amongst his eateries, too.

The start of a vegan empire

Kenney first cut his teeth in the fine-dining kitchens of New York City. He eventually set out on his own in Southern California, bringing a new style of vegan cuisine that fused traditional and advanced culinary techniques with plant-based ingredients. The result was inconceivable at the time—vegan food that was worthy of a white tablecloth experience.

Kenney’s first few restaurant concepts featured low lighting, clean-cut lines, and immaculate plating precision. The menus incorporated a balance of raw and cooked dishes, many of which employed the use of sous vide, smoking, fermentation, and other high-end techniques that distinguished his style from other vegan restaurants.

In recent years, Kenney has ventured into more relaxed categories of cuisine—from a food hall in Rhode Island to a drive-thru in Orange County, CA. Once reserved for special occasions, the Matthew Kenney brand has become more accessible for every kind of eater.

Expansion of an idea

Even during the pandemic, as restaurants closed at an alarming rate, Kenney opened five new restaurants while avoiding permanent closures at many of his existing businesses.

We’re in awe of what the brand has accomplished, thankful for the good it has done for the vegan movement, and thoroughly addicted to his Instagram feed of mouthwatering meals, delicate desserts, and adorable Maine Coon cat, Rumple (@rumple.thecat). While always quick to report on his latest accomplishment, we decided a comprehensive guide to Matthew Kenney Cuisine (MKC) was in order. Whether you’re looking for a new date night spot, a fast-casual go-to, or a vegan sweets shop, here is all you need to know about the MKC empire. 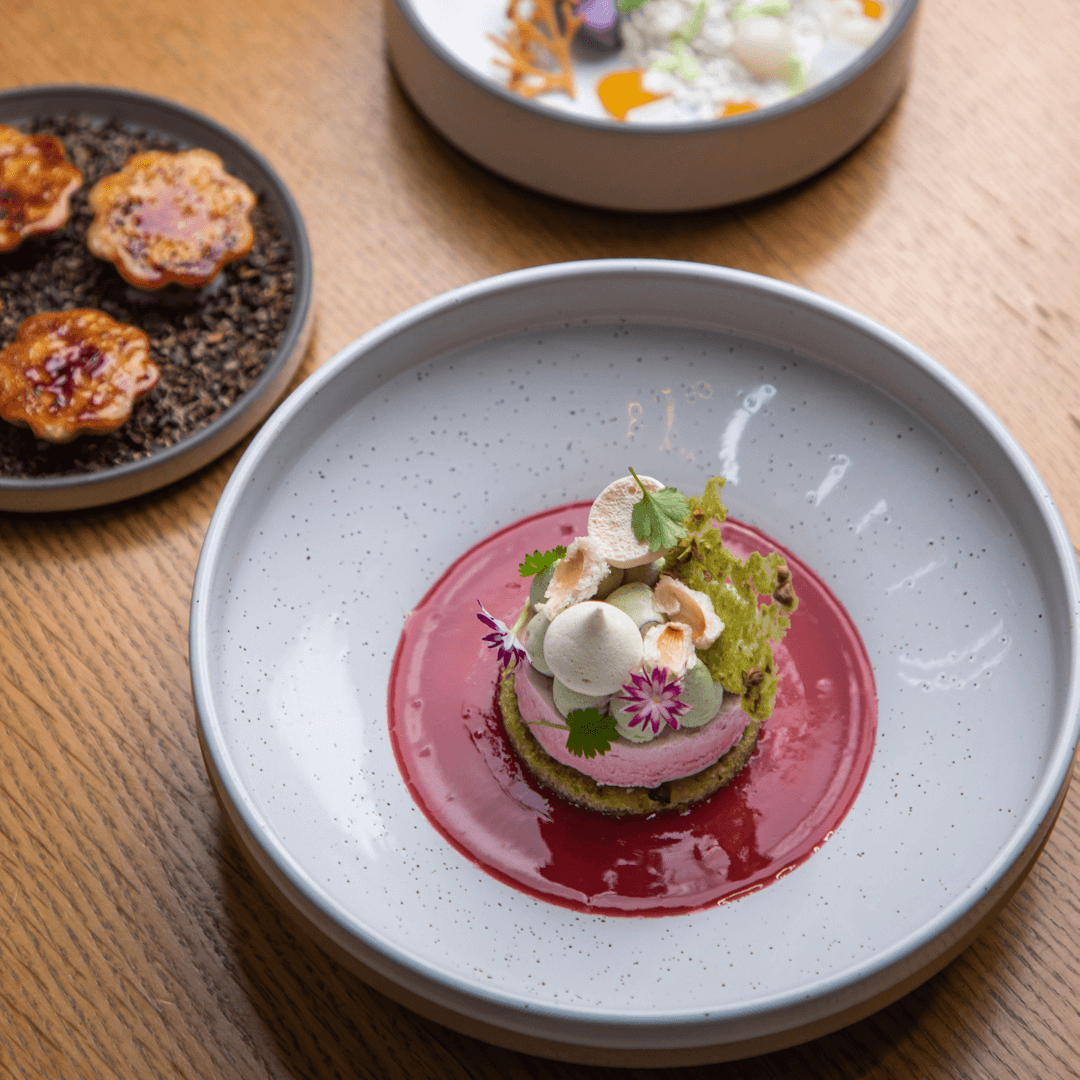 Kenney’s first (and currently only) location in Australia, Alibi has a colorful menu with stand-out dishes such as kimchi dumplings, watermelon poke, cashew ricotta-stuffed squash blossoms, and pavlova for dessert.
Location: Sydney, Australia 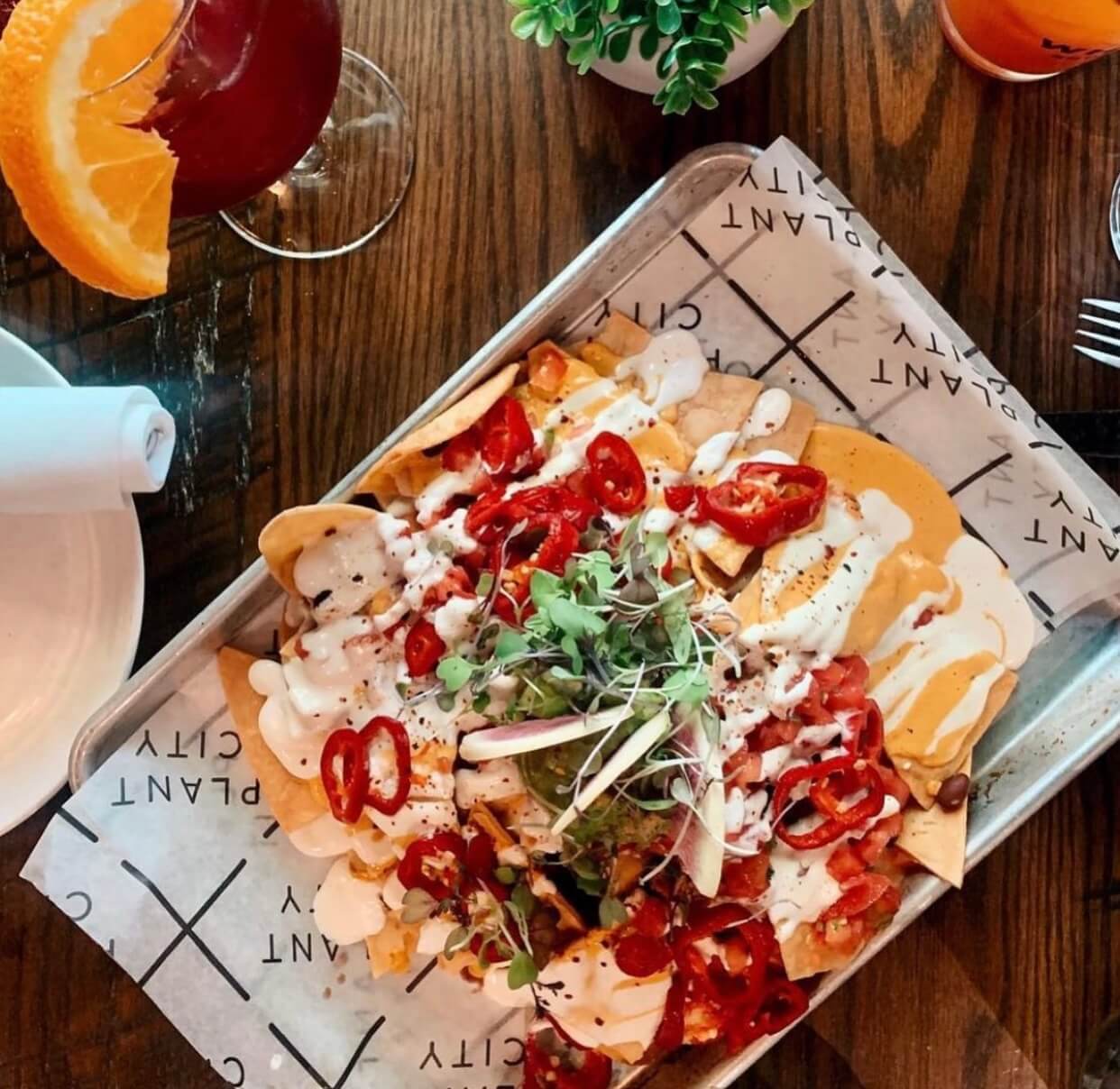 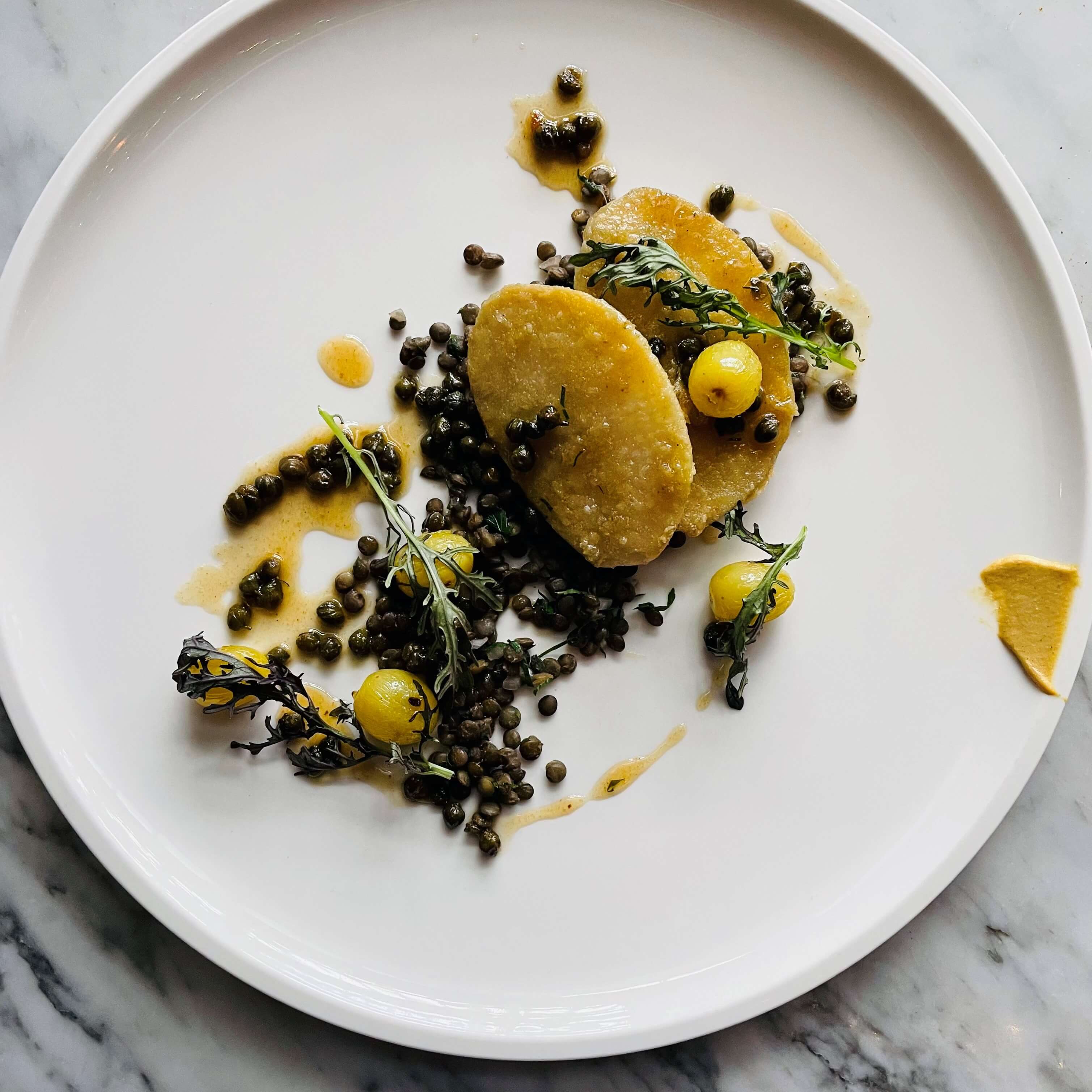 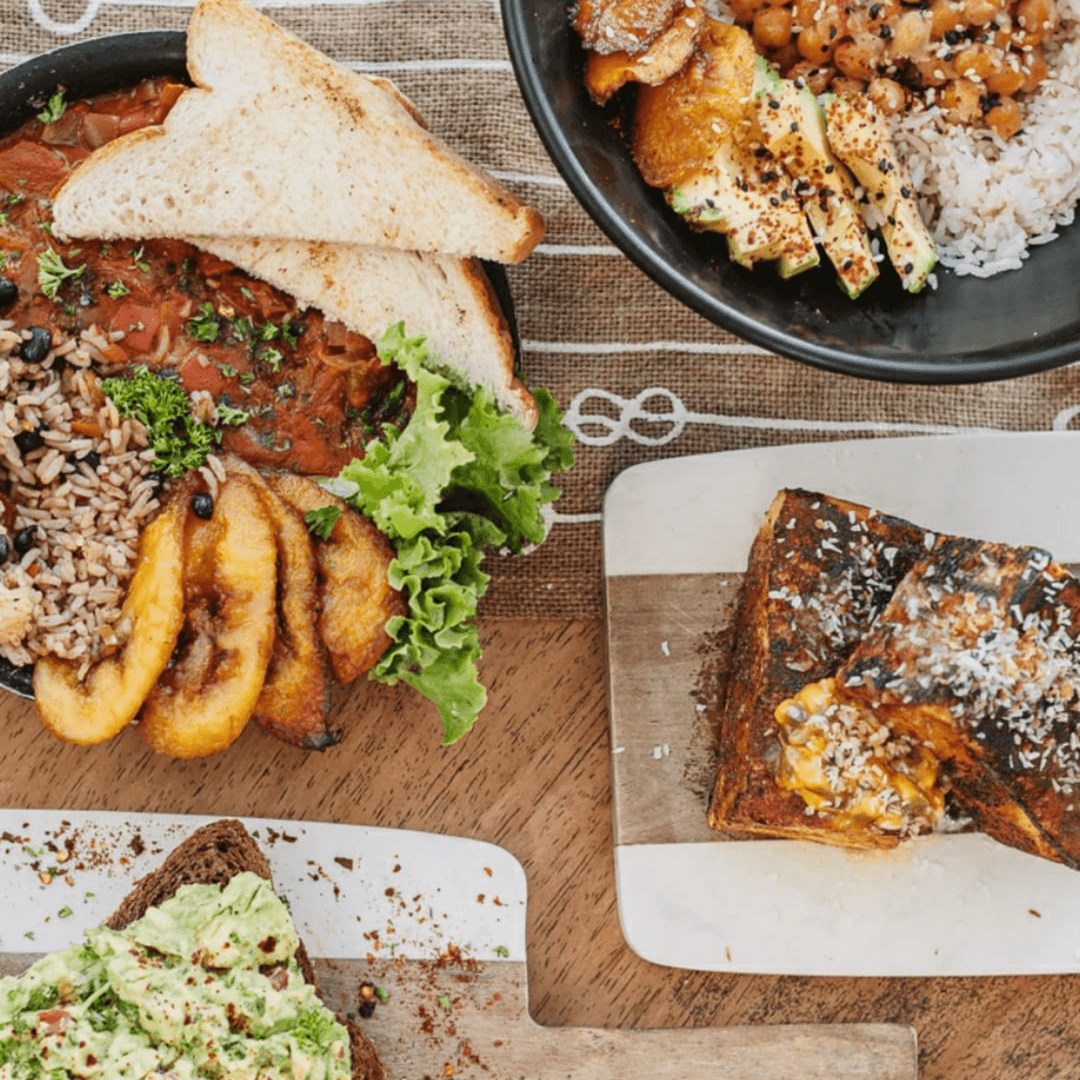 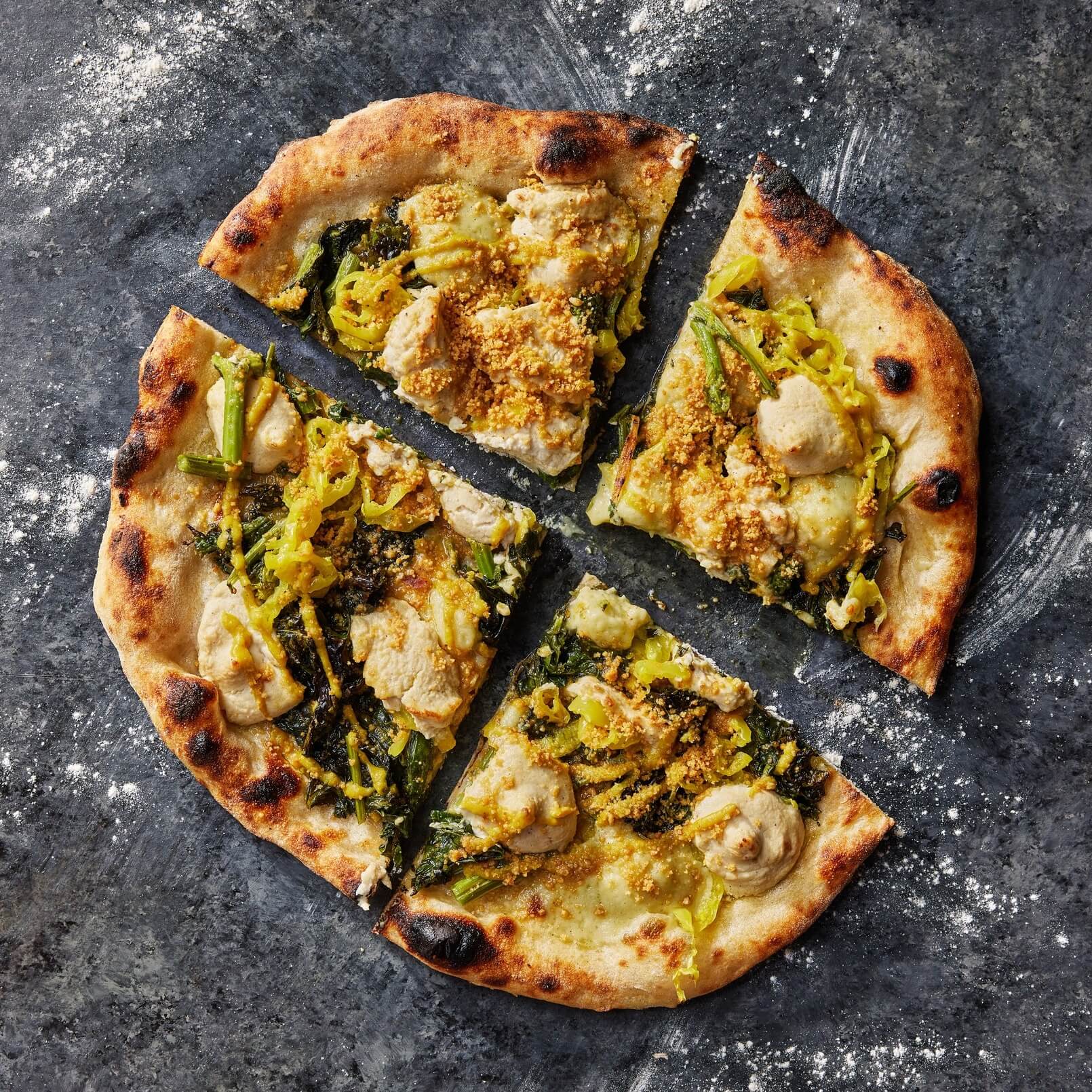 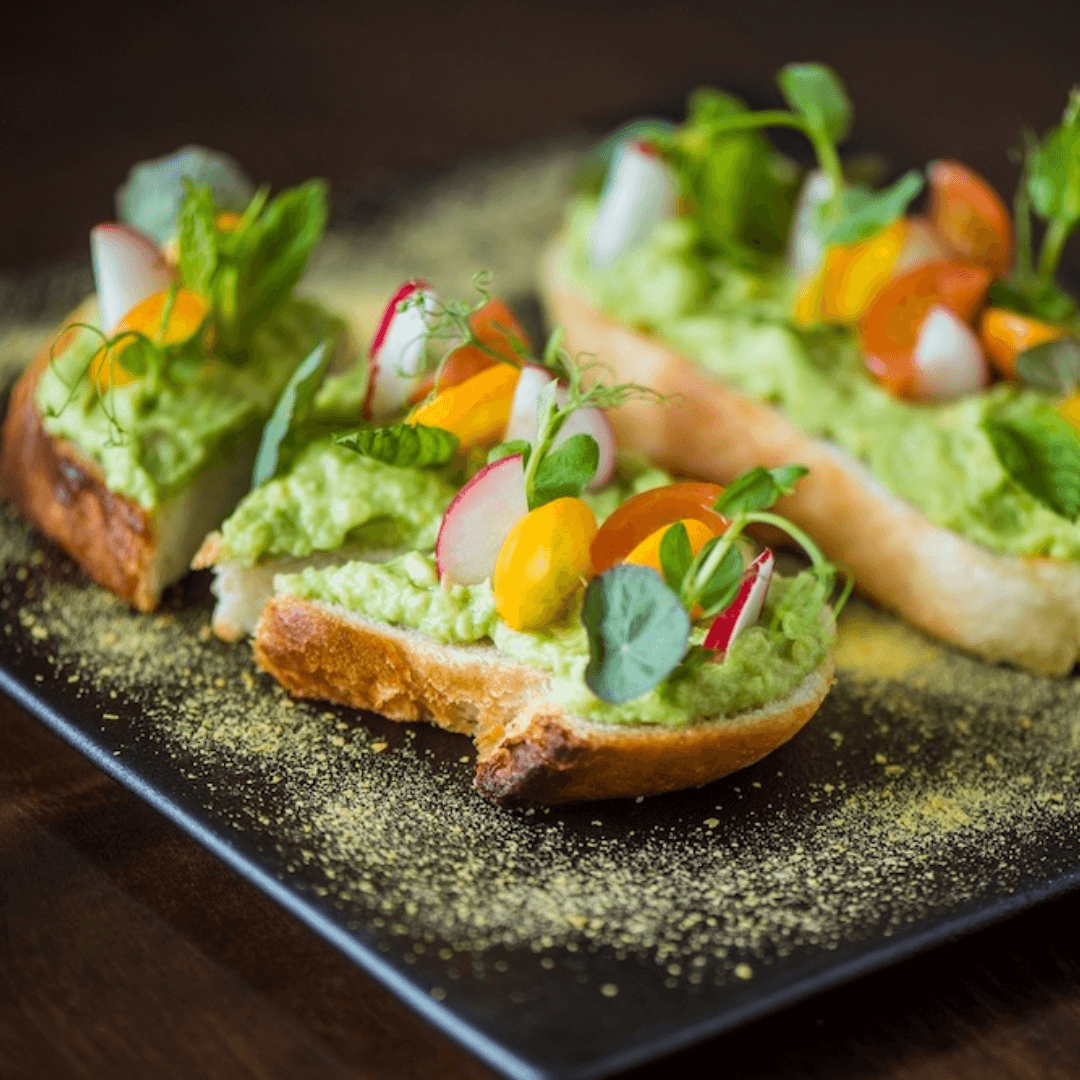 Back in 2018, Kenney partnered with Saudi Arabian vegan prince, Khaled bin Alwaleed, founder and CEO of the venture capital fund KBW Ventures, to open the first Folia location in Los Angeles at the Four Seasons Hotel in Beverly Hills. Years later, the fine dining establishment has locations across the Middle East (though the flagship location has shuttered). The rotating menu offers dishes made with seasonal produce that differ by location, but you can expect Kenney’s signature brand of vegan fine dining.
Locations: Manama, Bahrain; Doha, Qatar; Dubai, UAE; Kuwait City, Kuwait; and Riyadah, Saudi Arabia 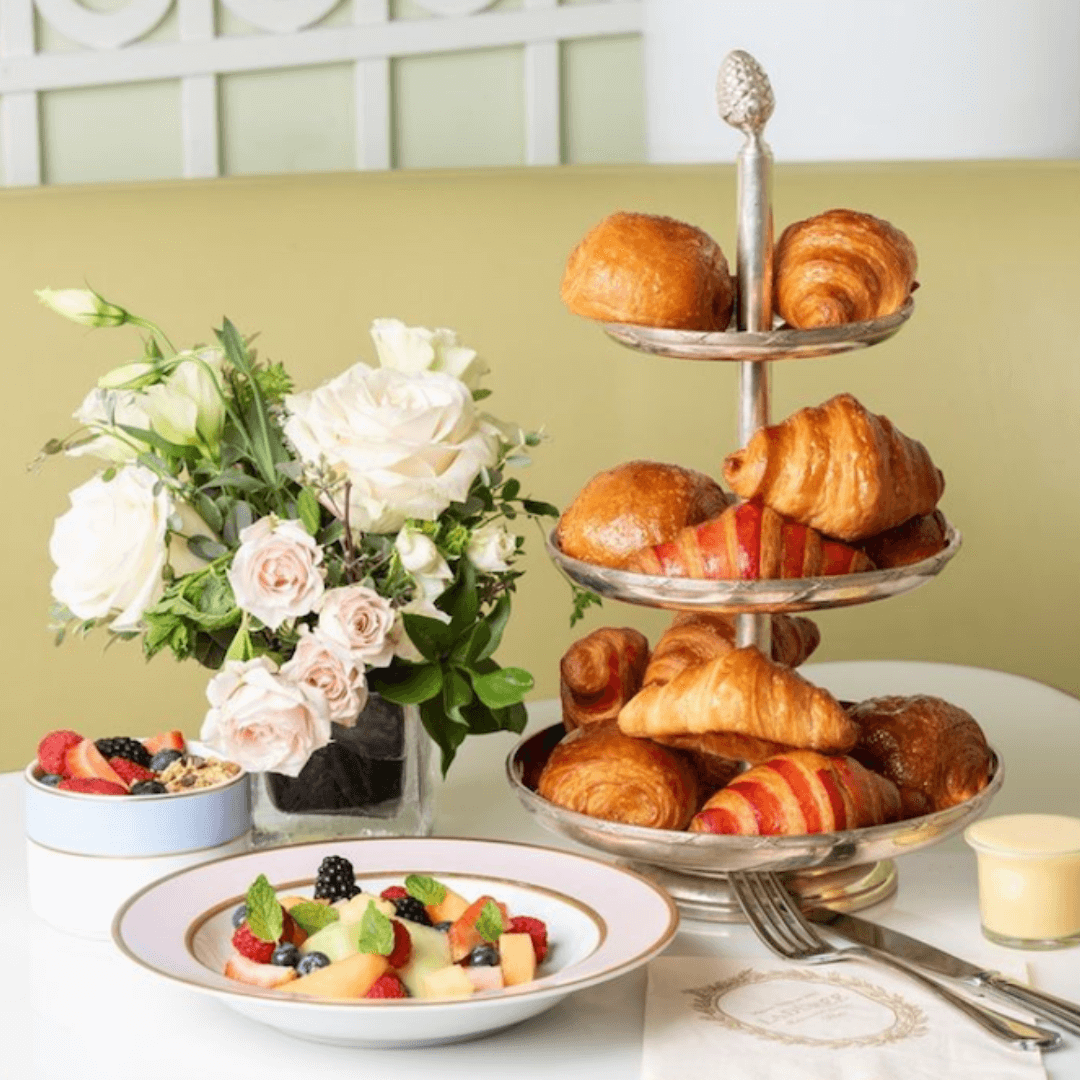 In 2019, this famed French pâtisserie trusted Kenney to convert its Beverly Hills, CA location into a fully plant-based concept, from vegan macarons to a comprehensive tea service. While some animal-based menu items have been reinstalled, the macarons, mille feuille, and ispahan confections remain vegan, along with a selection of heartier, savory dishes. Kenney’s macarons are available for shipping nationwide.
Location: Beverly Hills, CA 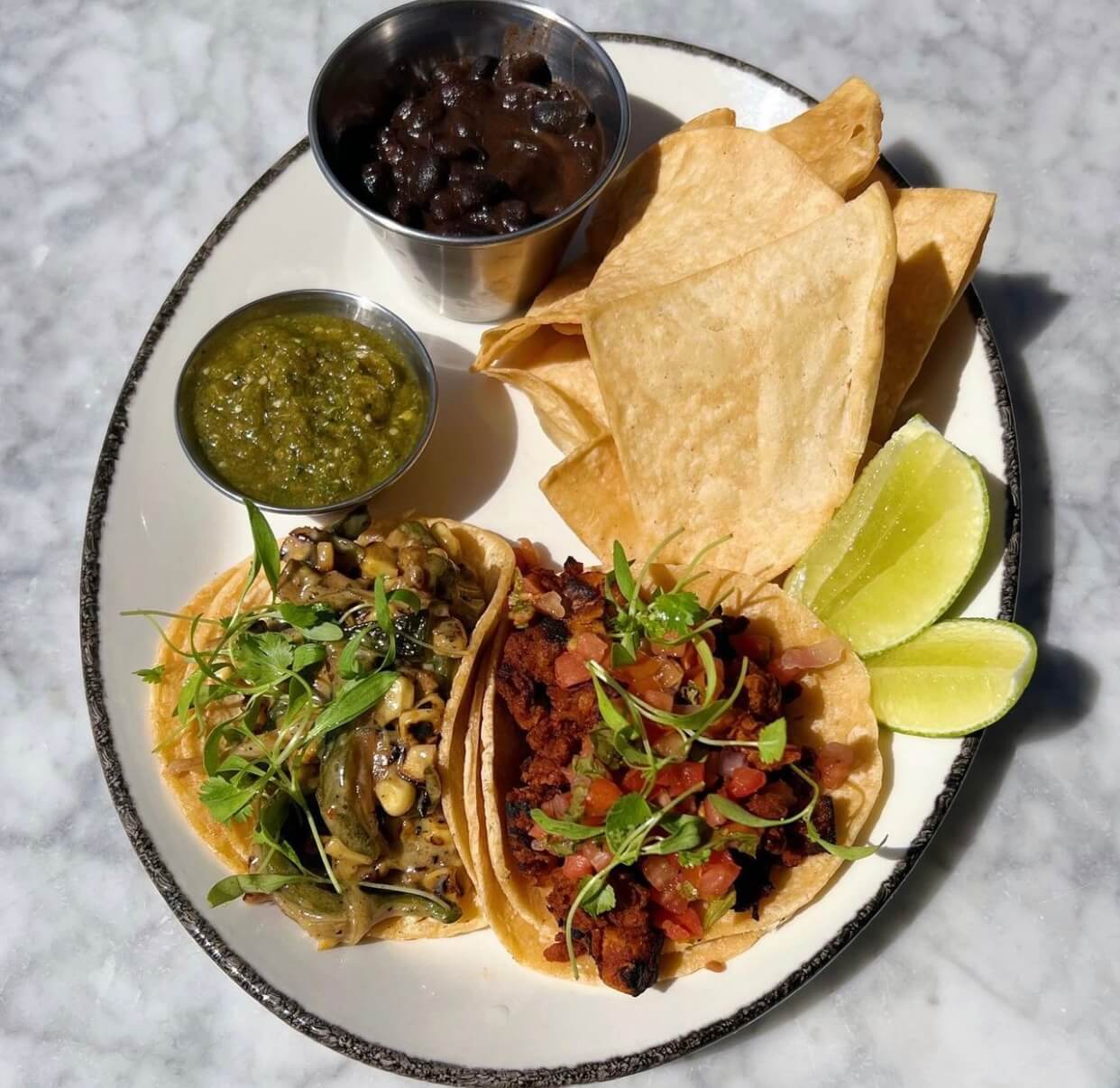 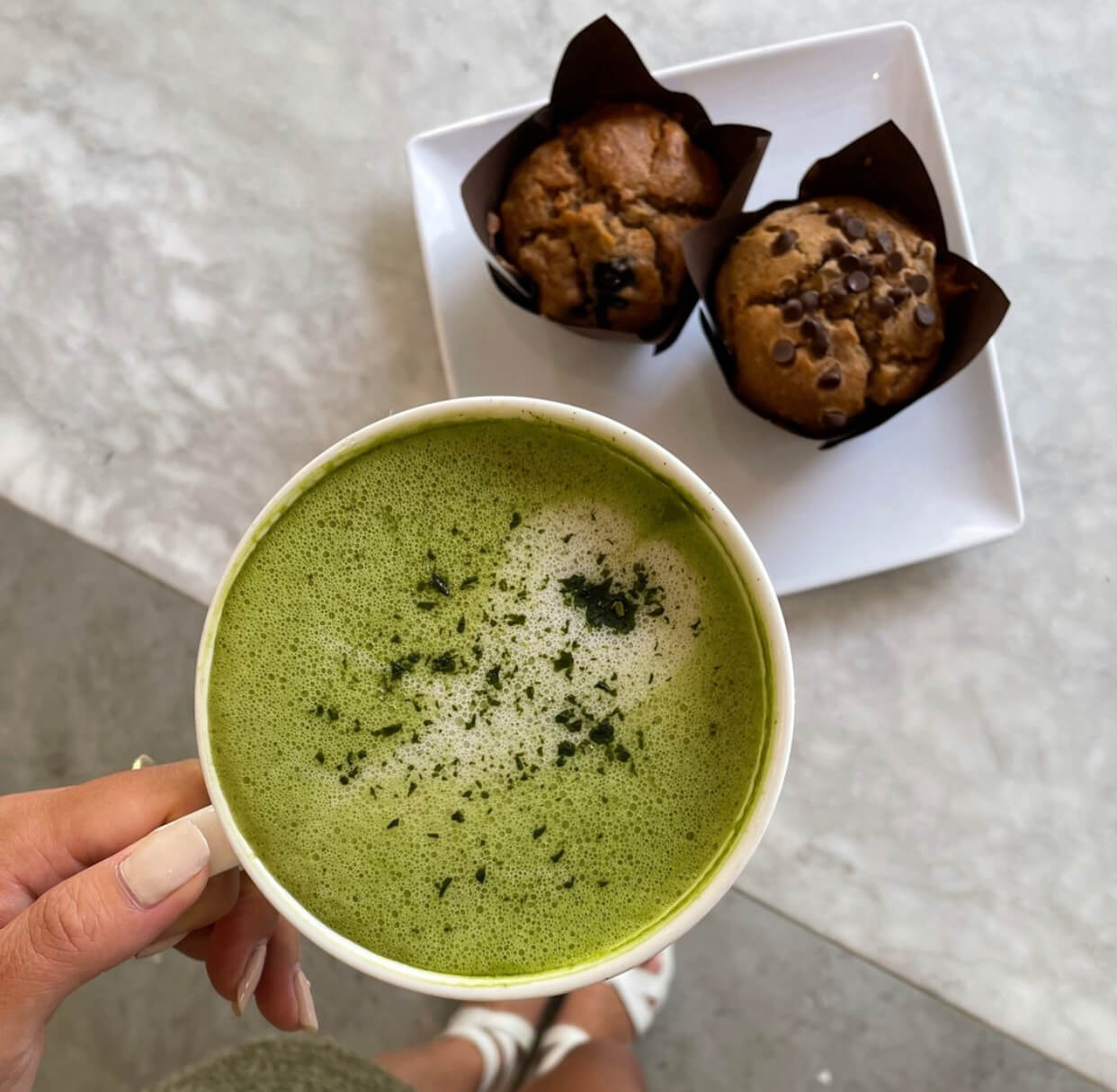 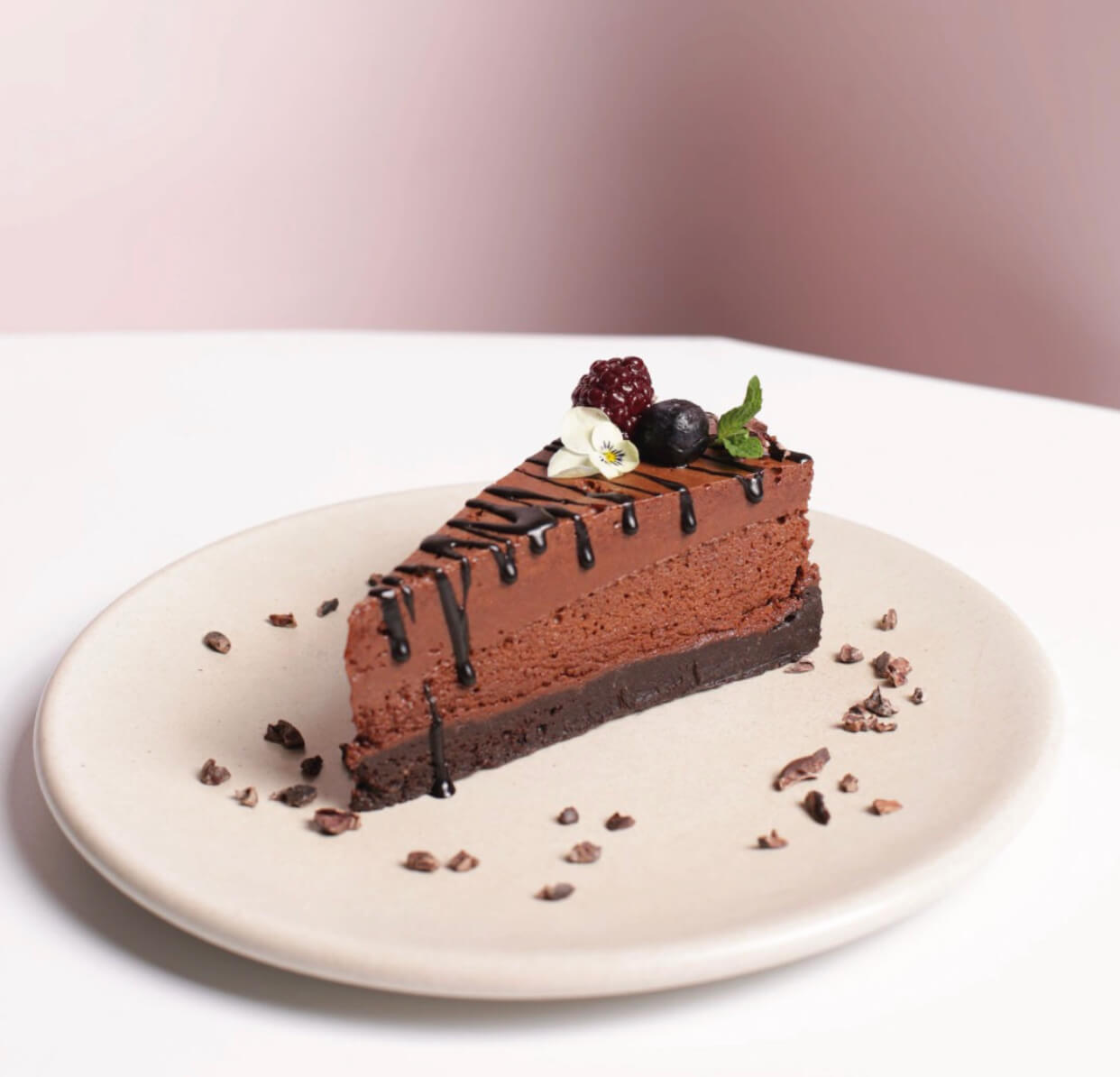 Kenney brings his most-loved dishes to Argentina and Spain with Mudrá, which features elevated versions of plant-based pizza and burgers as well as decadent desserts like dairy-free cheesecake and flan de calabaza—aka pumpkin flan. A tighter selection of Mudrá favorites is also available at Mudrá Express in Buenos Aires.
Locations: Buenos Aires, Argentina and Madrid, Spain 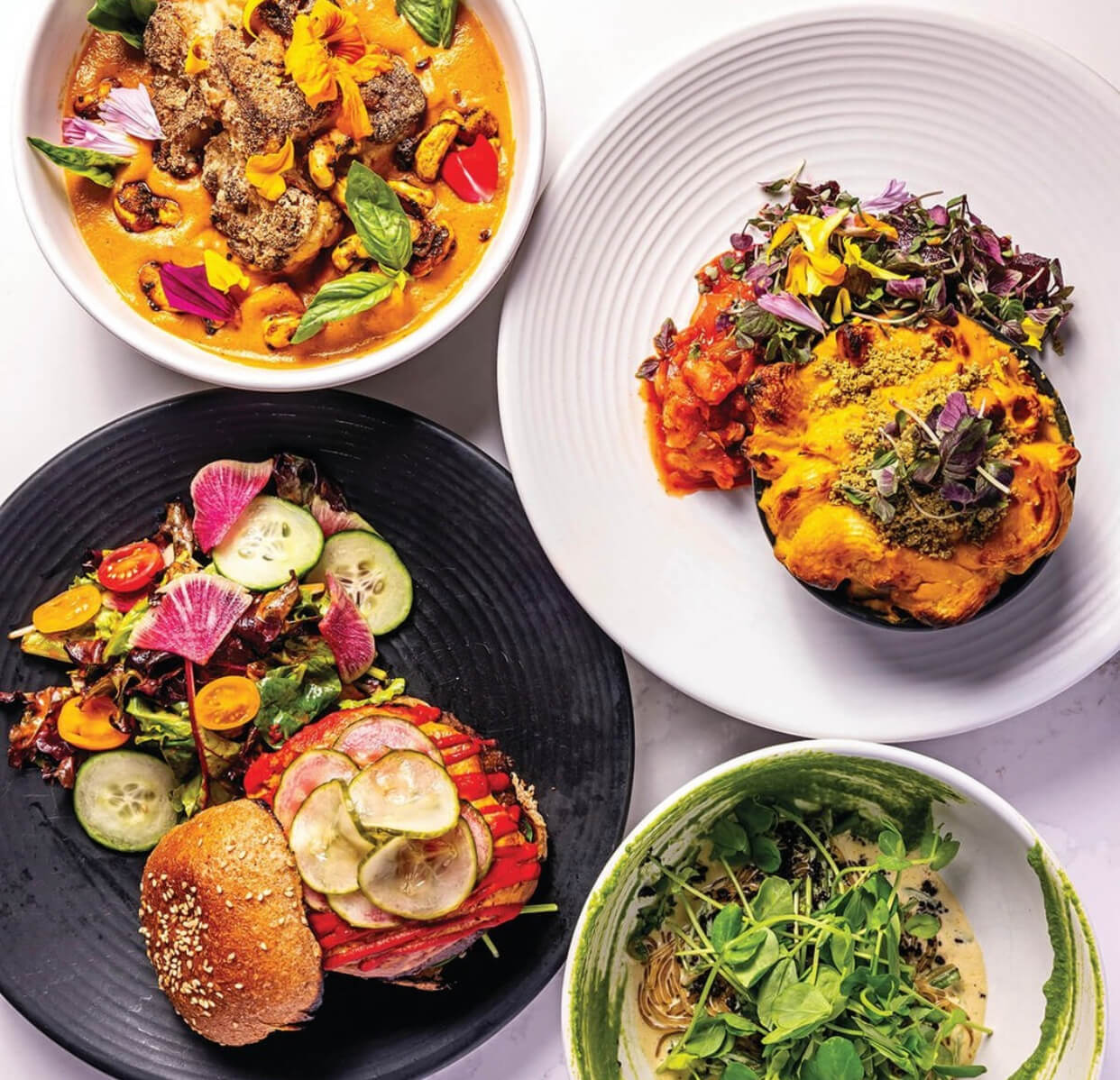 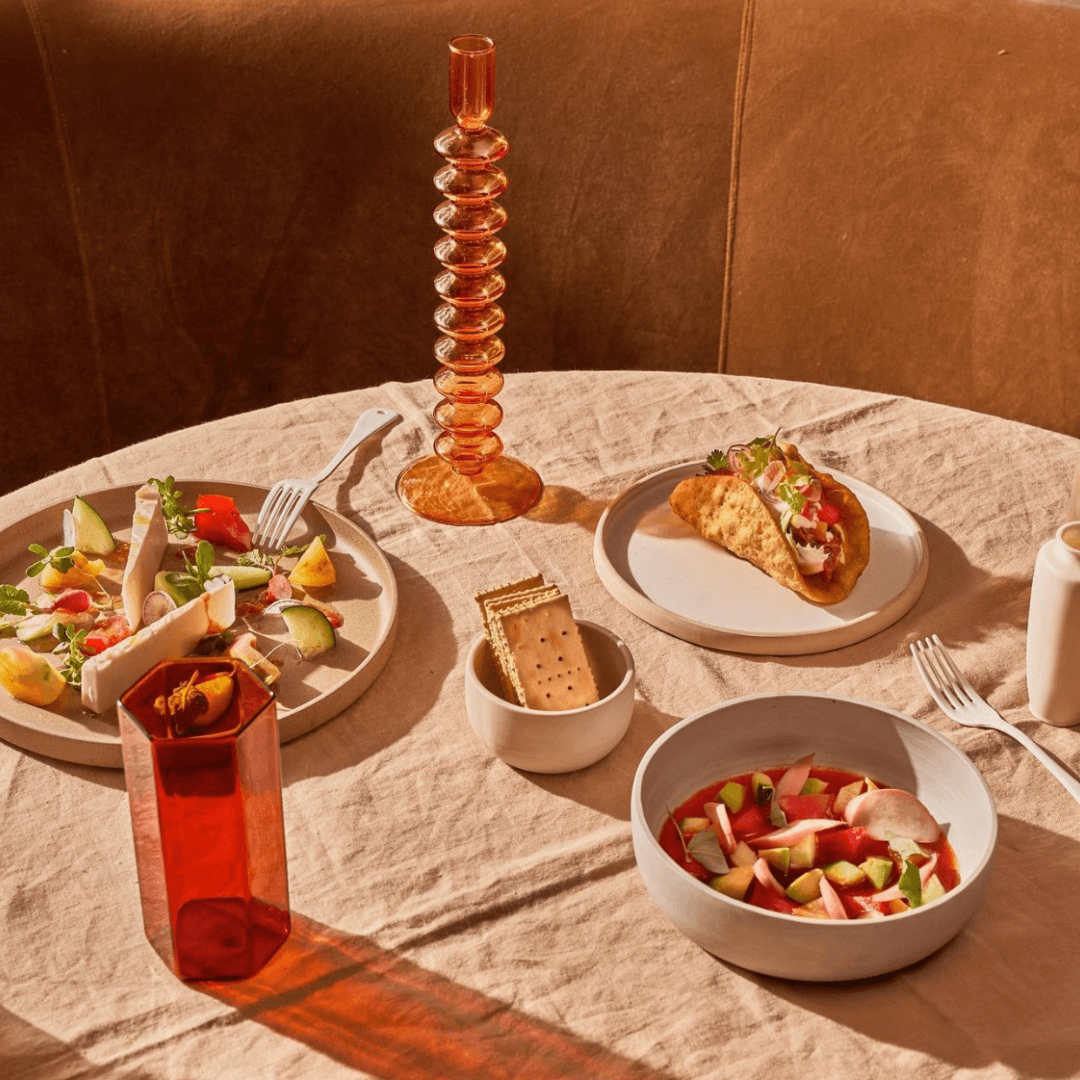 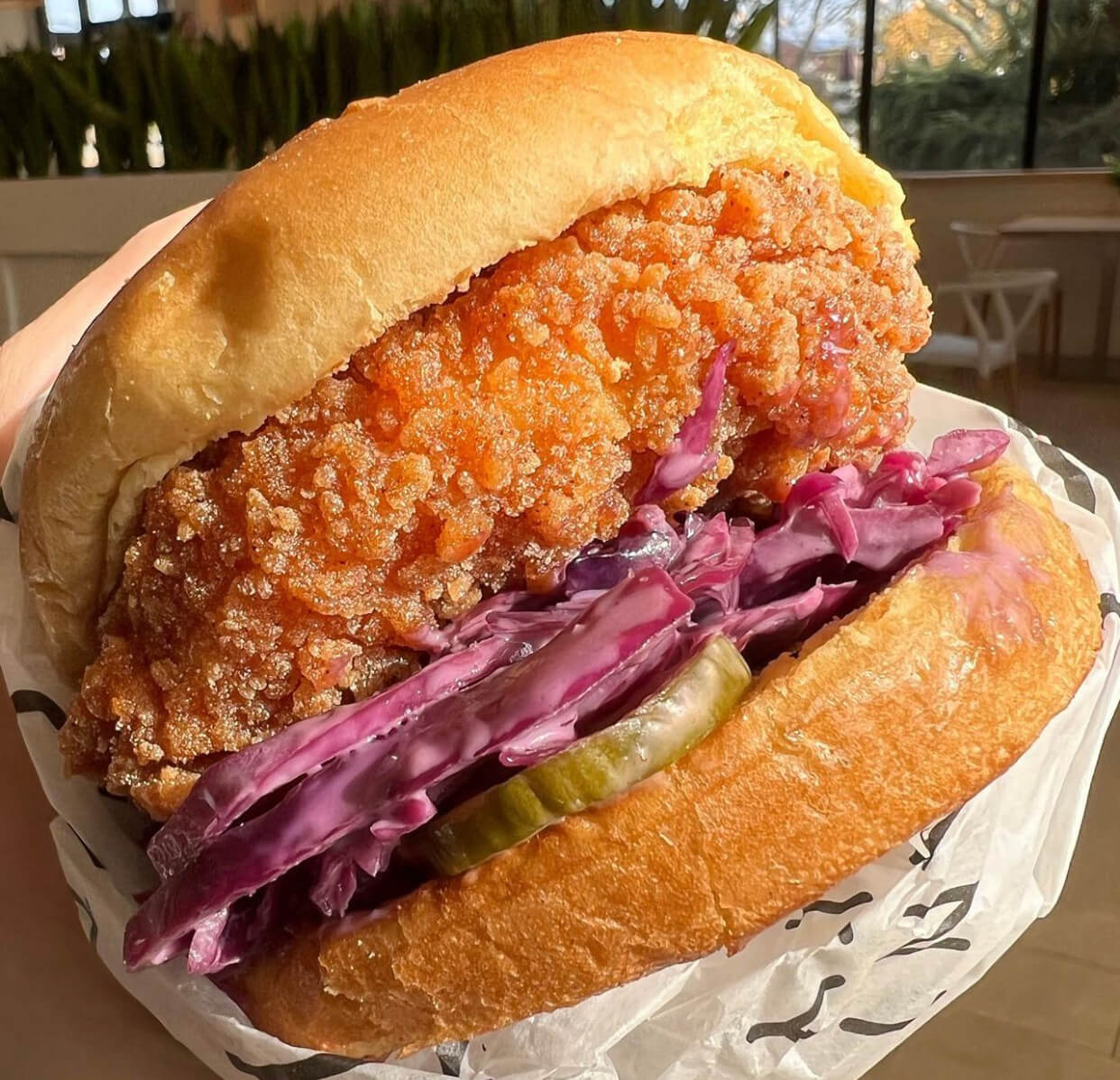 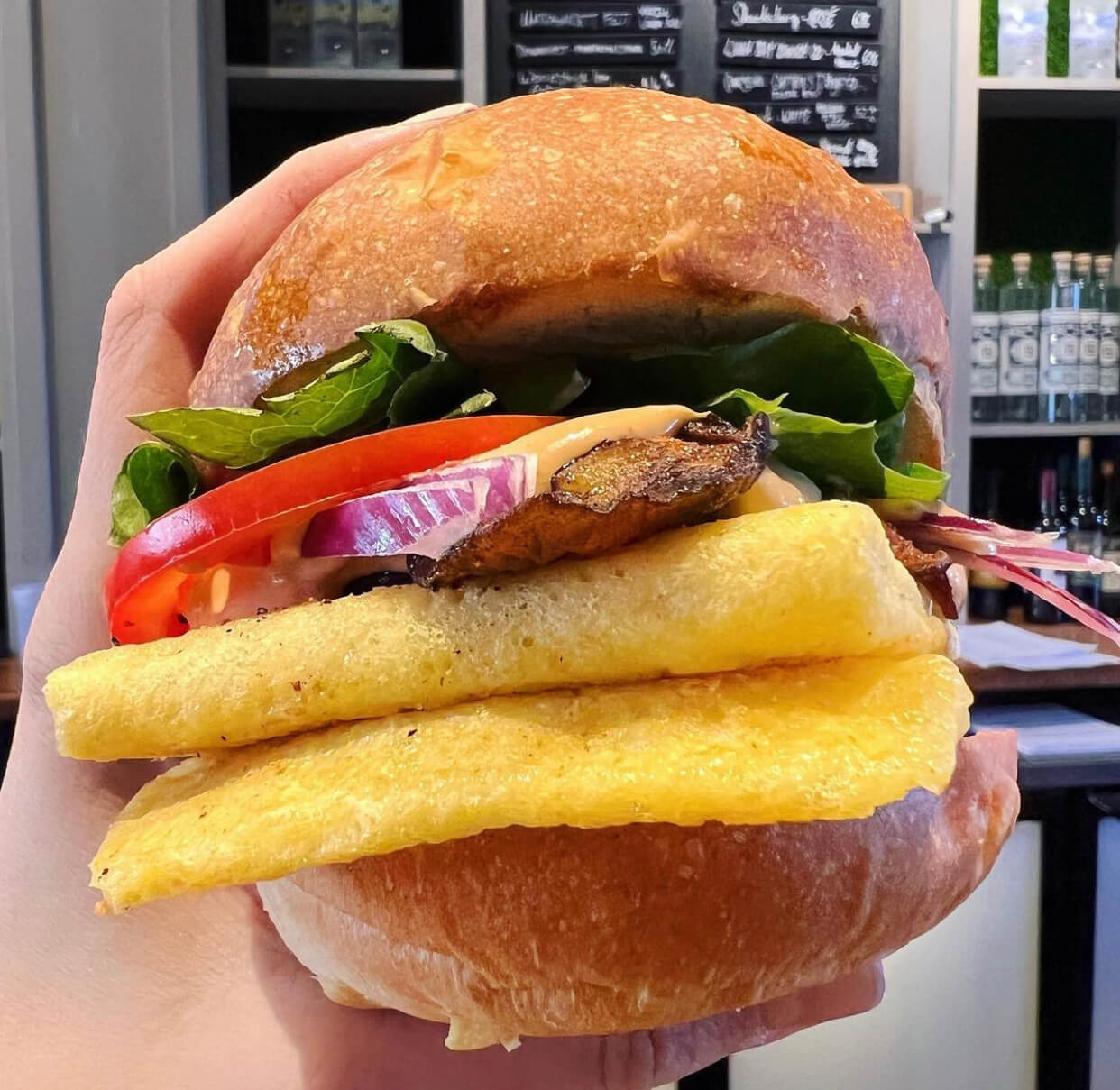 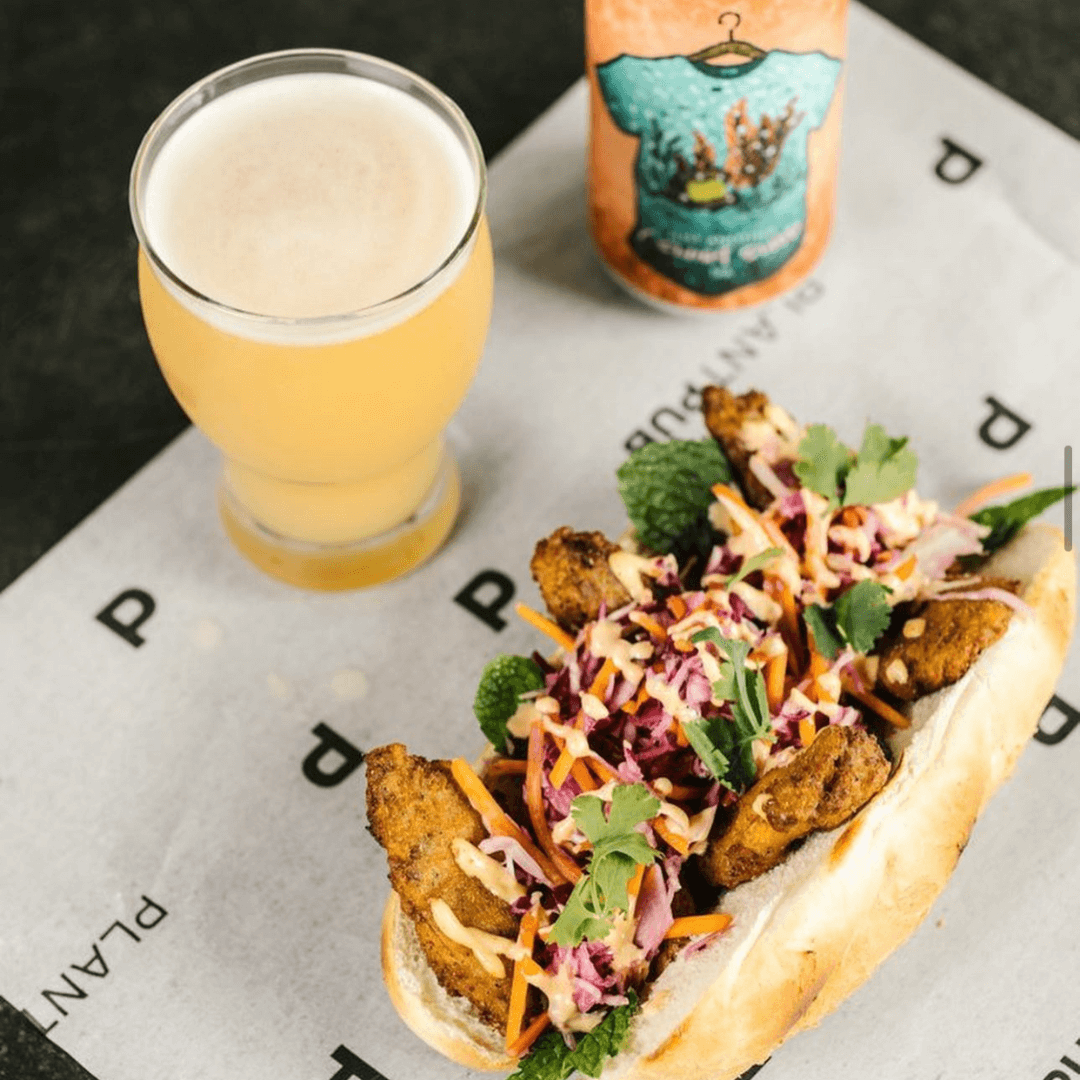 Boston is known for its pubs, so it’s fitting that Kenney’s two restaurants in the city’s metropolitan area pay homage to that. The menu, crafted by New Englander and celebrity chef Mary Dumont, features pub fare like fries, nachos, cauliflower wings, and burgers as well as several kinds of pizza. In true pub fashion, it has a craft beer menu.
Locations: Cambridge and Boston, MA 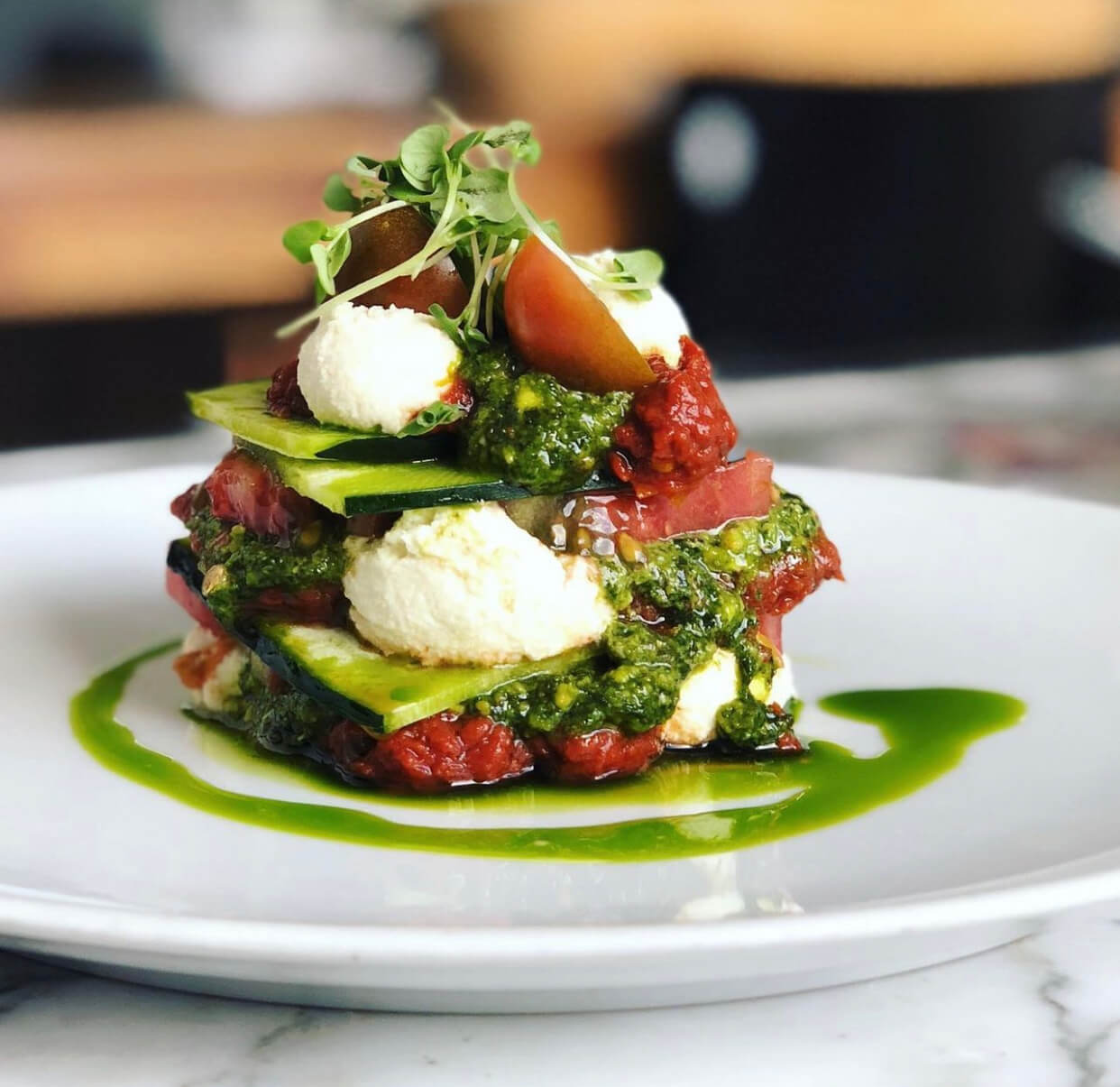 The flagship Plant Food + Wine on the luxe strip of Abbot Kinney Boulevard is the epitome of Kenney’s plant-based fine dining. The menu offers a blend of dishes made with locally-sourced, in-season produce as well as stalwarts such as chanterelle mushroom-topped toast, artisanal cheese plates, and the ever-reliable kelp noodle cacio e pepe, plus an extensive organic and biodynamic wine list.
Locations: Los Angeles, CA; Lima, Peru 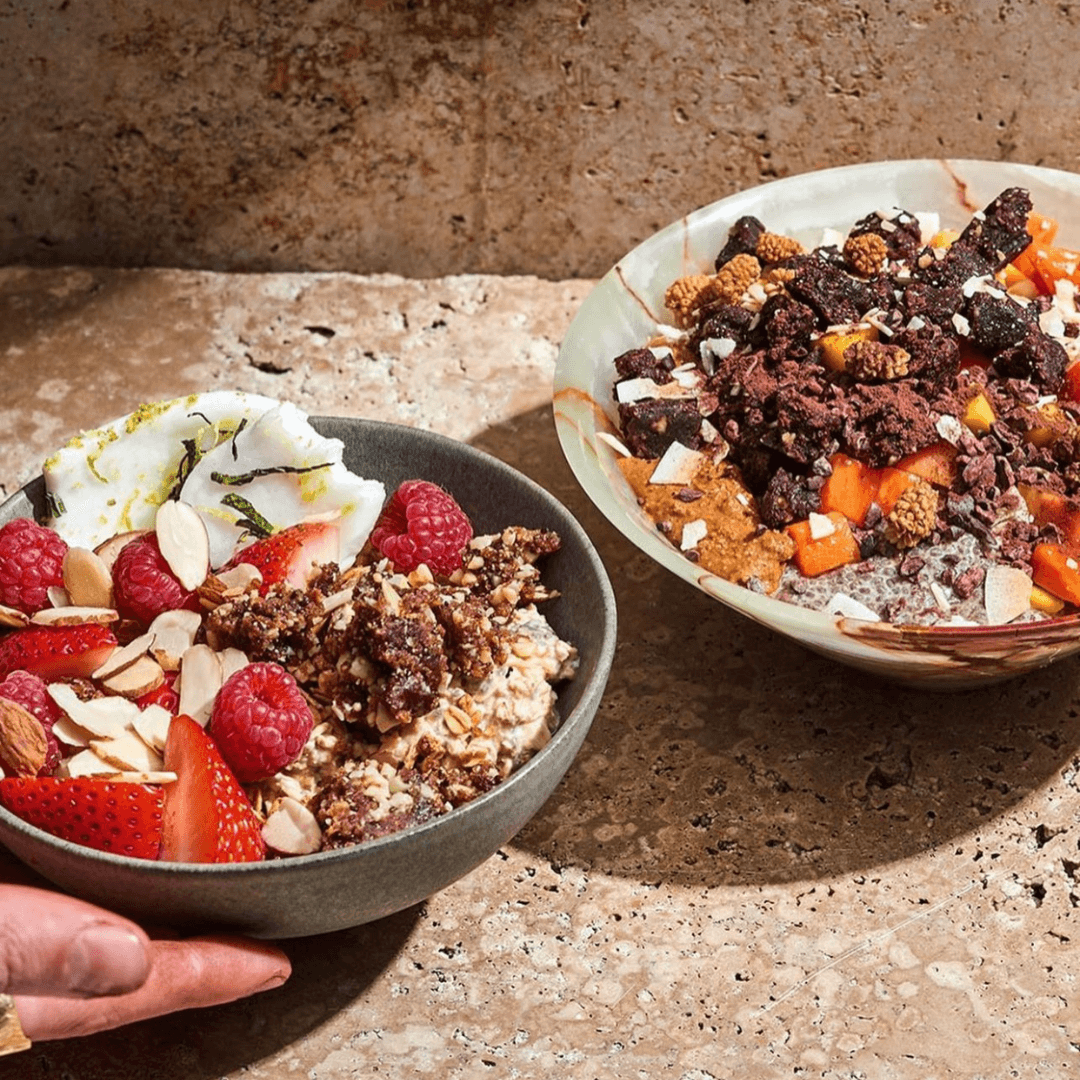 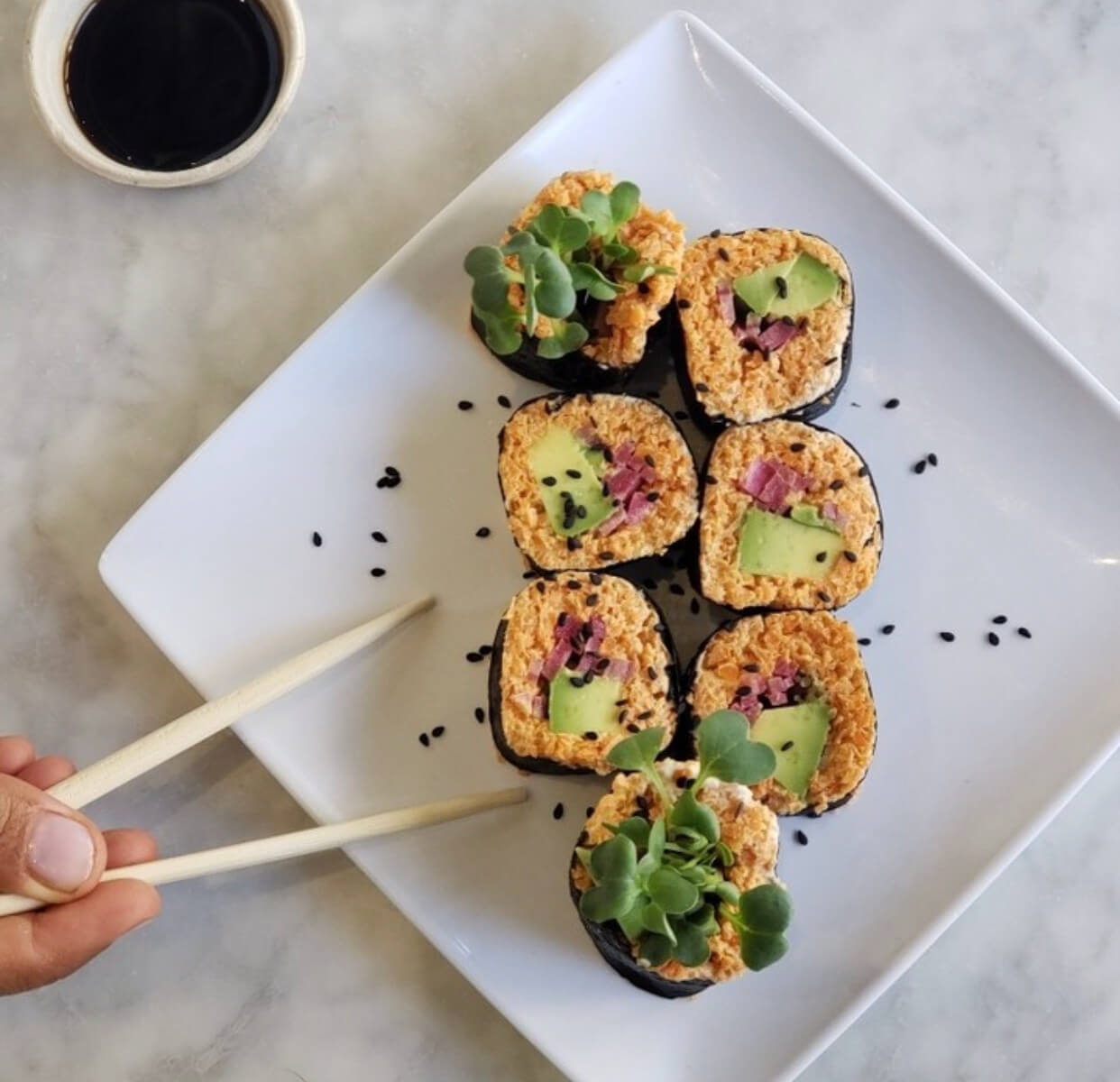 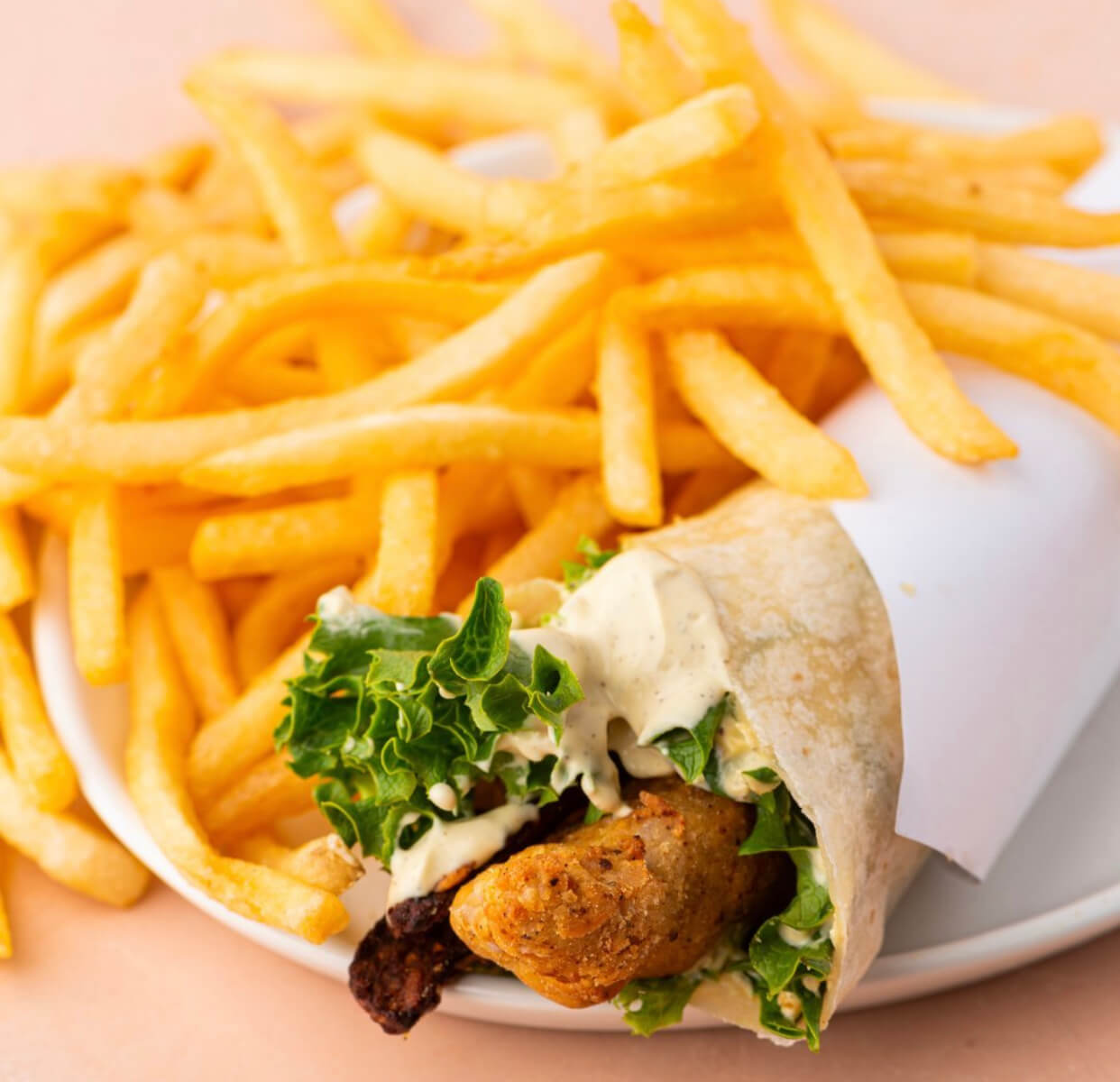 Take Matthew Kenney quality ingredients and meld it with a drive-thru concept, and you have Veg’d. The casual eatery took over a former Del Taco in Orange County, CA to serve vegan burgers, tots, and swirly soft-serve to the beach-going crowd. Thanks to a healthy dose of salads, smoothies, and bowls, there’s something for everyone here.
Location: Costa Mesa, CA 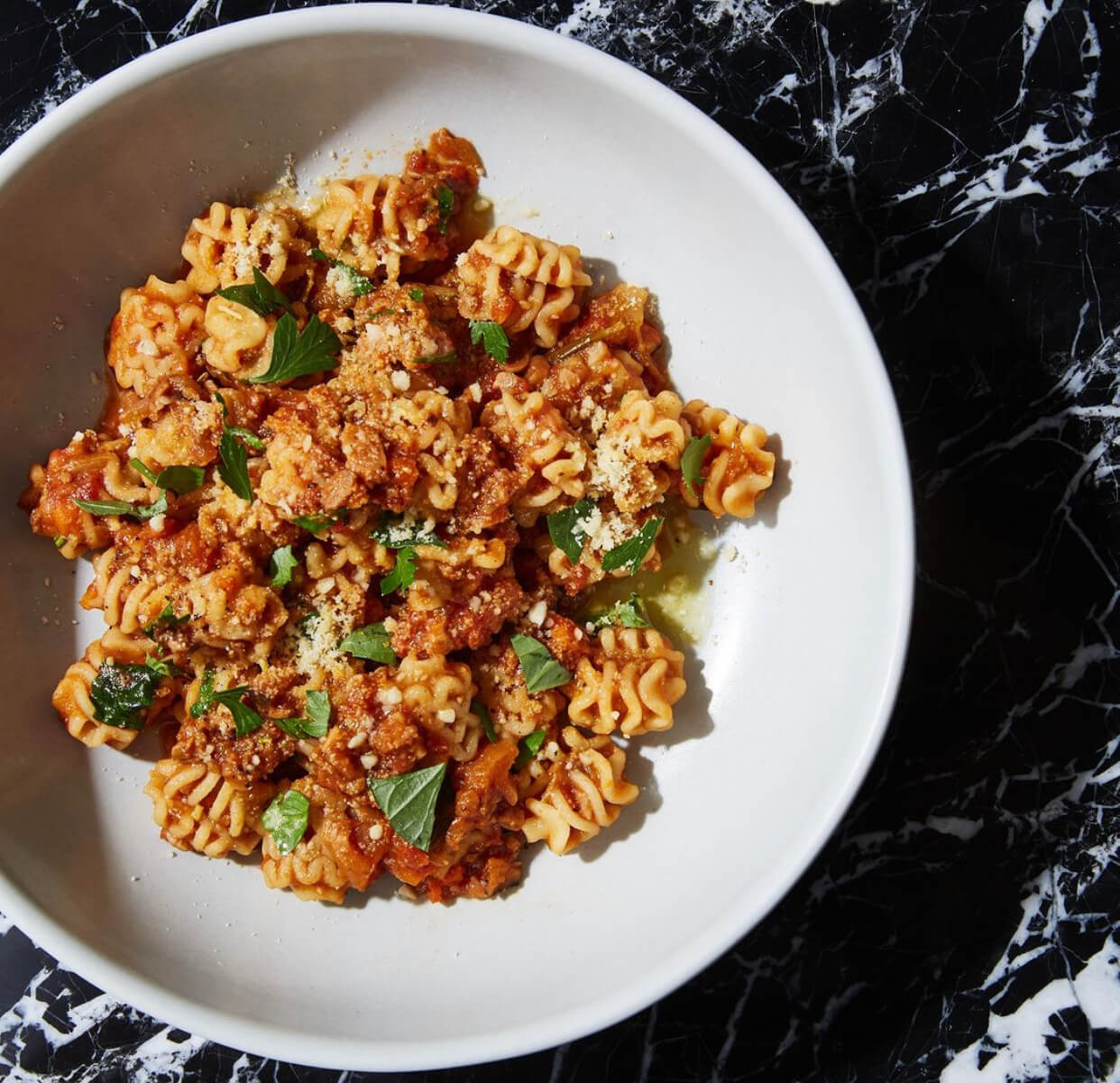 Inspired by the rustic elegance of homemade pasta, Sestina dishes up familiar Italian flavors, including rigatoni arrabiata, pasta puttanesca, ravioli alfredo, and more. Stop by for brunch to try the limoncello waffles and caprese sandwich and order a side of garlic bread for the table.
Locations: Culver City, CA 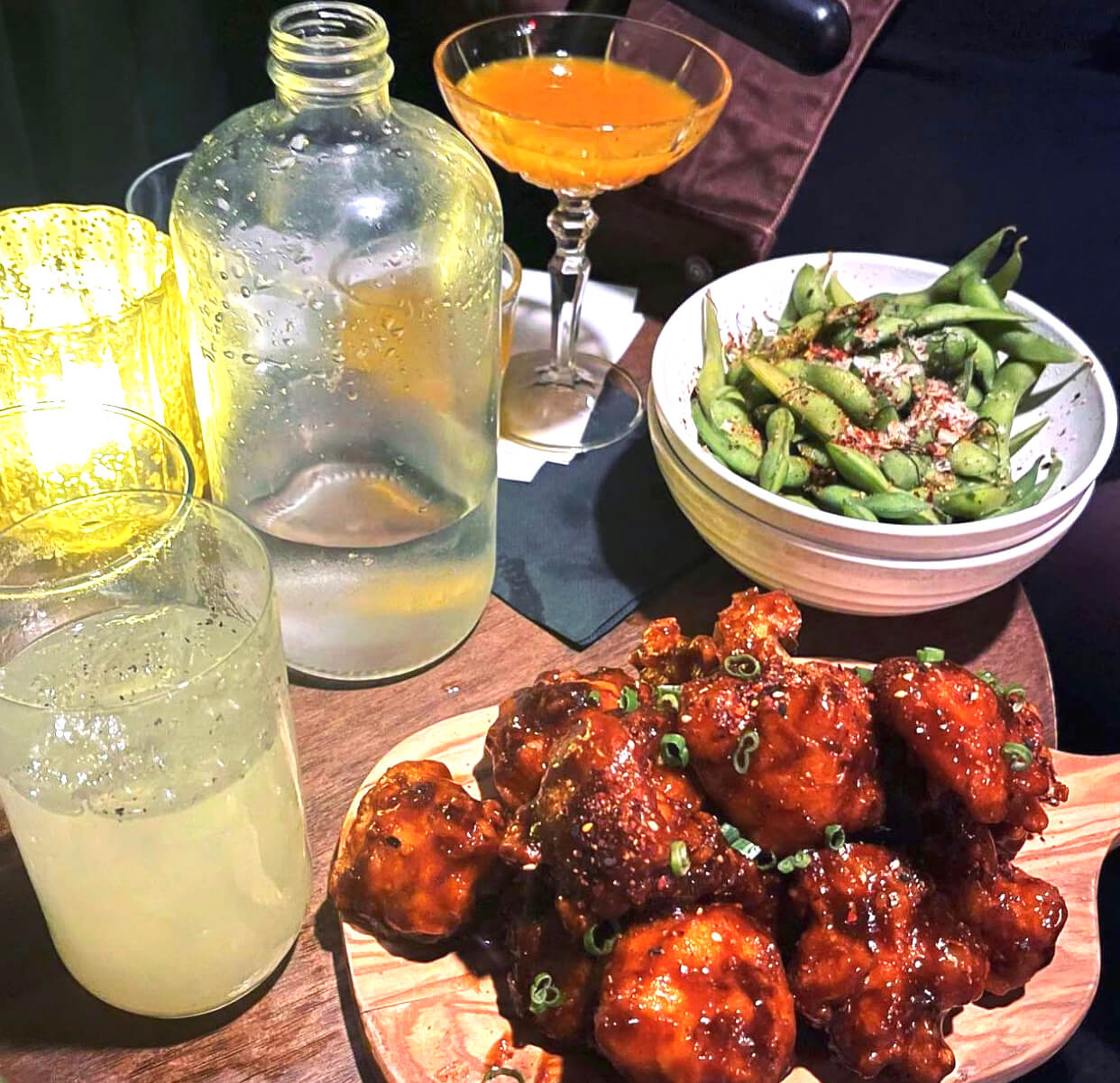 Kenney’s first foray into the speakeasy scene can be found next door to Plant City in Providence. The intimate space features conversation-starting cocktails and a small plates menu to keep things interesting. Like any good speakeasy, a seat at the table is only open to those in the know, so book your reservation before visiting.

In winter 2023, Kenney plans to add two more restaurants to his growing fleet: Floraison in New York City and Avivar in San José del Cabo, Mexico. The menus and additional details have yet to be released.

For more about Matthew Kenney, read:

17 Diabetes-Friendly Lunches You Can Make Ahead For...